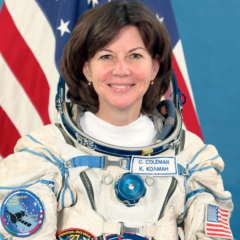 Cady Coleman is ASU’s Global Explorer in Residence, Professor of Practice in the School of Earth and Space Exploration, and co-host of the Interplanetary Initiative’s Mission: Interplanetary podcast. With Professor Andrew Maynard, Associate Dean at the College of Global Futures, Cady explores the big questions, challenges, opportunities and mysteries we face as we seek to build positive futures on Earth and beyond. Their guests range from science fiction writers and artists to engineers and rocket scientists. Mission: Interplanetary was envisioned and designed by experimental artist and scholar Lance Gharavi and Stephen Christensen. It is produced in partnership with Slate.

A former NASA astronaut and retired U.S. Air Force colonel, Cady has logged more than 180 days in space, including two space shuttle missions and a six-month expedition to the International Space Station, where she acted as the Lead Robotics and Lead Science officer.

On the ground at NASA, Coleman served in a variety of roles within the Astronaut Office, including Chief of Robotics, lead for tile repair efforts after the Columbia accident, and, most notably, the lead astronaut for the integration of supply ships. She paved the way for commercial spaceflight collaborations that are now commonplace.  Before retiring from NASA, Coleman led open-innovation and public-private partnership efforts for the Office of the Chief Technologist at NASA Headquarters. As a volunteer test subject for the US Air Force centrifuge program, she set several human endurance/tolerance records while performing physiological and new equipment studies.

Dr. Coleman is a passionate advocate for inclusion in STEM/STEAM fields and a sought-after speaker on a wide range of topics. A contributor to ABC News on space-related stories, she co-anchored coverage of the SpaceX launch and the Mars Perseverance rover landing. While at NASA, Cady was frequently selected to provide commentary for CNN, ABC and Fox. Other speaking highlights include the opening speech for TED 2011 from the Space Station, addressing the UN for World Ocean Day and TED Unplugged 2019.

Cady is currently a research affiliate of the MIT Media Lab and serves on several boards, including the Smithsonian National Museum of Natural History, Greenfield Community College, Dent the Future and Skycatch, an innovative A.I. company that provides 3D mapping data for timely decision-making. She is also an advisor to Earthrise Alliance, which uses satellite imagery to provide context for environmental and social justice issues.

An amateur flute player, she is best known for her “Space Duet” with Ian Anderson of Jethro Tull and her work from space with the acclaimed Irish band, The Chieftains. She serves as a consultant for space-related media work, which has included coaching actress Sandra Bullock from the ISS in preparation for Bullock’s astronaut role in the major motion picture “Gravity.”