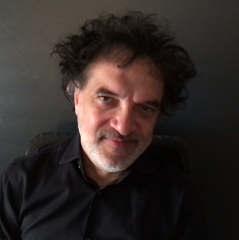 Lance Gharavi is an experimental artist and scholar. He is a Professor in the School of Music, Dance and Theatre at Arizona State University and Associate Director of ASU’s Interplanetary Initiative. His work focuses on points of intersection between performance, technology, science, and religion. An early pioneer in digital performance, he specializes in leading transdisciplinary teams of artists, scientists, designers, and engineers to create compelling experiences and advance research.

He is the director of St. Bird, an art/science collective, the leader of Ars Robotica, an initiative to advance research in robotics and AI through the methods and insights of the arts, and the Executive Director of the Centre for Applied Eschatology, an ongoing conceptual art project about endings and our relations to them. He is Affiliated Faculty with the School of Earth and Space Exploration; The Center for Human, Artificial Intelligence, and Robot Teaming (CHART); The Center for Behavior, Institutions, and the Environment; and the Melikian Center.

Current projects include: Port of Mars, an NSF-funded game-based platform for social science experiments to help future human communities thrive in space and on Earth; Mission: Interplanetary, a podcast about space exploration; and GHOST Lab, a DoD-funded laboratory/art installation for research into robotics and AI.

Recent projects have involved research robots and AI, architectural projection, motion capture, social media, 3D projections, and planetarium systems. Much of Gharavi's artistic work focuses on intersections of art and science. His efforts make scientific research and history accessible to the general public, query the implications of scientific theories and technological innovations, and explore ways in which artists, scientists, designers, and engineers can collaborate to advance research and produce compelling experiences. He collaborated with EarthScope—the largest solid Earth science project ever funded by the National Science Foundation—to write a children's book about earthquakes. His ongoing research project into robotics and performance, Ars Robotica, was selected as a Transdisciplinary Exemplar by the Alliance for the Arts in Research Universities (a2ru).

Gharavi's scholarship on religion, technology, and performance has been published around the world and in several languages. His work appears in journals including Theatre Topics, Modern Drama, Text and Performance Quarterly, Ecumenica, The Journal of Dramatic Theory and Criticism, PAJ, Esoterica, and Performance Matters. He is the author of Western Esotericism in Russian Silver Age Drama (New Grail 2008), editor of the anthology Religion, Theatre, and Performance: Acts of Faith (Routledge 2012), and the translator for the special 100-year anniversary edition of Aleksandr Blok's symbolist masterpiece, Roza I Krest (Tsentr Knigi Rudomino 2013), published in Moscow.

Gharavi is the recipient of the Bridge Initiative: Women in Theatre 2018 Ally of the Year Award for his efforts in promoting diversity in the arts. In 2016 he directed a production of She Kills Monsters that was cited in the Arizona Republic as one of the top twelve shows in Phoenix between 2006 and 2018.