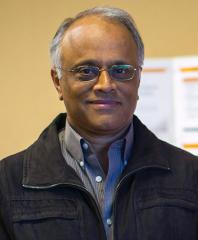 Sarma Vrudhula is a professor in the School of Computing and Augmented Intelligence  at Arizona State University. He received a bachelor's degree in mathematics from the University of Waterloo, Ontario, Canada, in 1976, majoring in computer science and mathematical statistics. He moved to Venice CA in 1977 and while enrolled as a graduate student at in EE-Systems department at the University of Southern California, worked as a research assistant in USC Information Sciences Institute in Marina Del Rey, CA.  He received his master's and doctoral degrees in electrical engineering from the University of Southern California in 1980 and 1985, respectively.

During 1985-1992, he was on the faculty of the EE-Systems department of the University of Southern California. From 1992 to 2005, he was a professor in the Electrical and Computer Engineering department at the University of Arizona. During that period, he was the founding director of the NSF UA/ASU Center for Low Power Electronics. He joined ASU in 2005, and became the director for the Center for Embedded Systems at ASU in 2006, which became an NSF IUCRC Center in 2009.  He became a fellow of the IEEE for “contributions to low power and energy-efficient design of digital circuits and systems.”