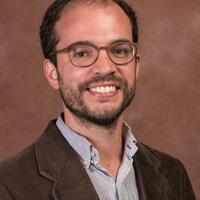 Matt Simonton received his doctorate in classics from Stanford University in 2012. While at Stanford he also earned an M.A. in Political Science with a concentration in political theory. Before his graduate work at Stanford he majored in Classics at Washington University in St. Louis. He comes to the New College in Interdisciplinary Arts and Sciences at ASU after spending a year as a visiting lecturer in history at the University of California, Berkeley.

Simonton's research brings contemporary social science theory to bear on ancient Greek history, particularly political history. He is interested in the ways in which the Greeks crafted social and political institutions in response to crises and how those institutions shaped history over time. Simonton's work also analyzes how Greek political actors appropriated existing cultural features of the ancient city-state - such as religious festivals, public spaces, and monumental architecture - for partisan purposes.

In his first book, "Classical Greek Oligarchy: A Political History" (Princeton University Press, 2017), Simonton approaches the phenomenon of Classical Greek oligarchy, or the "rule of the few," from an institutional standpoint, comparing oligarchic political practices to those of contemporary authoritarian regimes.

In his second book project, tentatively titled "Watchdogs of the People: Demagogues and Political Culture in Ancient Greece," Simonton seeks to provide a history of demagoguery (popular leadership) in Greece from its beginnings in fifth-century Athens through the Roman Imperial era. Drawing on theories of popular culture, the study will approach the words and actions of demagogues as a potential window onto the everyday thoughts and values of non-elite Greeks.