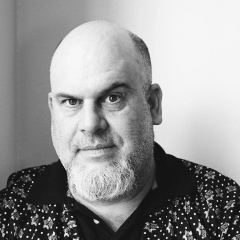 Jason Davids Scott earned a doctorate in theatre in 2009 at the University of California Santa Barbara, and also earned a master's with honors from UCSB in 2004. Prior to graduate school, Scott graduated with a BFA in cinema studies from New York University's Tisch School of the Arts, and established a career a film publicist and development executive in both Los Angeles and New York, working for Castle Rock Entertainment and later actress/producer Helen Hunt.

Scott's past publications include articles and reviews in the Mid-Atlantic Almanck; the online journals Response and Otherness: Essays and Studies; the Journal of Popular Culture.  Scott wrote the artist profiles for "Monologues for Latino/a Actors," edited by ASU professor Micha Espinosa and published by Smith and Kraus. Other publications include chapters or contributions to "Robert Downey Jr. From Brat to Icon" (MacFarland); the "Cambridge World Encyclopedia of Actors and Acting"; "The Films of Wes Anderson" (Palgrave-Macmillan); and "The Cinema of Hal Hartley" (Wallflower/Columbia University Press).

Scott's first solo effort is "Everything but the Script: Professional Writing in the Entertainment Industry," published by Cognella in 2019. Scott continues to serve as a freelance publicity and marketing consultant for entertainment firms in both Los Angeles and New York, and has created marketing materials for more than 200 film projects and individual clients.

Currently, Dr. Scott is researching and writing a new book for Wiley-Blackwell about the work and career of writer/director/producer Joey Soloway entitled Transauteur, which revisits the auteur theory from the perspective of non-binary and trans identity and theory.

Professor Scott was a lecturer at Arizona State University (2009-2011), and also served as the coordinator for curricular revision for the School of Theatre and Film. From 2011-13, Scott was an assistant professor at the School of Theatre at Stephen F. Austin State University in Nacogdoches, Texas. A longtime member an former board member of the Mid-Atlantic Popular & American Culture Association (MAPACA), Scott has also presented at conferences hosted by the Popular Culture Association/American Culture Association (PCA/ACA), the Society for Cinema and Media Studies (SCMS), and the American Society for Theatrical Research (ASTR).

At Arizona State University, Scott currently teaches required undergraduate courses in Sex and Violence in Cinema, Entertainment Industry History, and Independent Film.  Scott is a faculty affiliate of the Center for Film, Media, and Popular Culture, and serves the extended Arizona community as an adjudicator and respondent for the Kennedy Center American College Theatre Festival.

As part of the leadership team of the Sidney Poitier New American Film School, Professor Scott has helped develop new curricular models to facilitate better retention and students success, helping to expand the production programs offerings and fulfill ASU's missions of inclusion, diversity, and equity. Among current projects is spearheading the development of the Standard Acknowledgment of Filmmaking Ethics (SAFE) set protocol to train filmmakers to better understand and deal with issues related to abuse of power, harrassment, and discrimination in industry workplaces.  Professor Scott is also the co-founder and chair of the Arizona Transfer Articulation Task Force for Film and Media, which oversees the film curricula at community colleges and public universities in Arizona (aztransfer.com).

Dr. Scott is gender non-binary and prefers the use of gender neutral pronouns in formal discourse.  They have two dogs (Ernie and Bert) and three cats (Catfish John, Loose Lucy, and Jolson.)

Everything But the Script