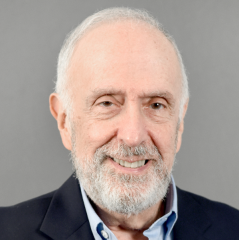 Robert Greenes joined ASU in 2007 to lead the then new Department of Biomedical Informatics (BMI). This unit, originally in the School of Computing and Informatics, in the Fulton School of Engineering, and for three years reporting directly to the Provost's Office, became part of the College of Health Solutions in 2012. Following a sabbatical in 2013-3014, to work on creating a collaboration initiative for interoperable healthcare apps, he returned to ASU as the Ira A. Fulton Chair of Biomedical Informatics. He is also a professor of biomedical informatics at the Mayo Clinic.

Before coming to ASU, Dr. Greenes spent many years at Harvard, in the field of BMI, first at Massachusetts General Hospital, then at Brigham and Women’s Hospital, where he established the Decision Systems Group in 1980, and developed it into a leading BMI research and development program. Dr. Greenes was professor of radiology and of health sciences and technology (HST), at Harvard Medical School, where HST is a joint division of Harvard and MIT. He was also professor of health policy and management at Harvard School of Public Health. For more than 20 years, he directed the Biomedical Informatics Research Training (BIRT) program, with support from the National Library of Medicine and other sources, with co-directors that, when he left Boston, represented 10 hospital and university-based informatics groups throughout the Boston area.

One of Dr. Greenes' earliest contributions was in the 1960's while a medical student and PhD student at Harvard, when he was co-developer of the MUMPS language and system, which has gone on to become one of the most widely used computer platforms in health information technology throughout the world to this day.  Dr. Greenes has been a practicing radiologist, and also had brief interludes in industry and at Stanford. Dr. Greenes’ research has been in the areas of clinical decision support, in terms of models and approaches for decision making, the knowledge representation to support it, and its clinical application and validation. He has also been active in the promulgation of standards and fostering of group collaborative work, particularly in knowledge management. A related research interest is human-computer interaction, and workflow optimization, particularly with respect to the use of clinical information systems by providers and patients, the improved capture of clinical data and the incorporation of individualized, context-specific decision support. Another interest is in personal biosensors for monitoring of patients at risk in a variety of settings. He also directs a new initiative focused on establishing a platform for interoperable apps to foster health care systems innovation.  Having authored over 250 peer-reviewed publications, he is also author of the leading textbook on computer-based clinical decision support, now in its second edition.