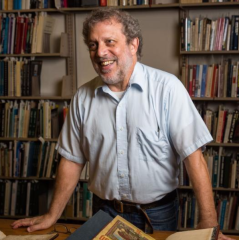 Richard G. Newhauser is a recipient of a John Simon Guggenheim Memorial Foundation Fellowship, Gladys Krieble Delmas Foundation/American Council of Learned Societies Senior Level Fellowship, and a fellowship at the National Humanities Center (through the Lilly Endowment). He is also a life member at Clare Hall, Cambridge University, and has directed two Summer Seminars funded by the NEH at Darwin College, Cambridge University, on "The Seven Deadly Sins as Cultural Constructions in the Middle Ages."

His major areas of research are focused on Middle English literature, especially the works of the Gawain-Poet and Chaucer, and intellectual history, in particular the moral tradition in medieval thought, and sensory studies (sensology). His most recent monographs include a translation of Peter of Limoges, "The Moral Treatise on the Eye" (2012); "A Supplement to Morton W. Bloomfield et al.," "Incipits of Latin Works on the Virtues and Vices, 1100-1500 A.D.'"(2008); "Sin: Essays on the Moral Tradition in the Western Middle Ages, Variorum Collected Studies Series" (2007); and "The Early History of Greed: The Sin of Avarice in Early Medieval Thought and Literature" (2000).

Newhauser has edited collections of scholarly essays, including "A Cultural History of the Senses in the Middle Ages" (2014); "The Seven Deadly Sins: From Communities to Individuals" (2007); "Virtue and Ethics in the Twelfth Century" (2005); and "In the Garden of Evil: The Vices and Culture in the Middle Ages" (2005). He has also contributed articles to R. M. Correale and M. Hamel, eds., "Sources and Analogues of The Canterbury Tales, I" (2002); D. Brewer and J. Gibson, eds., "Companion to the Gawain-Poet" (1997); The Review of English Studies, Medium AEvum; Studies in Philology; and numerous other journals.

The moral tradition in the intellectual history of the Middle Ages