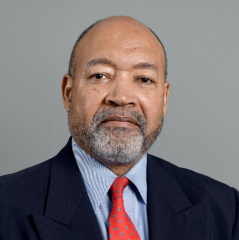 Thomas J. Davis teaches U.S. constitutional and legal history at Arizona State University, Tempe, and has taught as a visiting professor of law at the ASU College of Law. As an historian and lawyer, he focuses on civil rights, employment, and property law, and particularly on  constitutional issues of race and identity. He received his doctorate in U.S. history with a minor in African history from Columbia University in the City of New York and his JD cum laude from the University at Buffalo School of Law in New York. Among his nearly 50 scholarly articles and books, he is the author most recently of "History of African Americans: Exploring Diverse Roots" (2016), a volume in the Greenwood Press American Mosaics series. His "A Rumor of Revolt: The "Great Negro Plot" in Colonial New York" (1985) was selected as one of the Gustavus Myers Center for the Study of Bigotry and Human Rights prize best books of the year. Davis has been a National Teaching Fellow, Herbert H. Lehman Fellow, Ford Foundation Advanced Study Fellow, National Endowment for the Humanities Faculty Development Fellow, Smithsonian Faculty Fellow at the National Museum of American History, and twice a Fulbright fellow (India and Jordan). He was the 2007 Wayne N. & Julia E. Aspinall Foundation Chair and Distinguished Visiting Professor of History, Political Science and Public Policy at Colorado's Mesa State College. Students and colleagues have repeatedly recognized him for excellence in teaching. He has been a nominee for the ASU College of Liberal Arts and Sciences Dean's Distinguished Teaching Award, the Zebulon Pierce Distinguished Teaching Award, and the Centennial Professorship Award. ASU students selected him in 2008 for a Last Lecture Award. Also he has received awards for distinguished lawyering, including being selected by the Arizona Foundation for Legal Services & Education as one of the “Top 50 Pro Bono Attorneys in Arizona" for “leadership, commitment and generosity in providing legal assistance to people who otherwise would be unable to afford legal help." The Maricopa County Bar Association (MCBA) and Community Legal Services (CLS) conferred on him the 2002 William T. Birmingham Clinic Services Award for “exceptional service to people with low incomes who need assistance ... to get access to justice" and “in appreciation for advancing the cause of equal access to justice for pro se clients." Also he was selected for the 2008-2009 Pro Bono Award as the Tenants Rights Attorney of the Year, the 2011-2012 Tenants' Lifeline Award, and the 2015 Volunteer Lawyers Program for Love of Justice Tenants Rights Clinic Sustaining Services Award. He served as a commissioner of the Superior Court of Arizona for the County of Maricopa's Judicial Merit Commission (2002-2015) and as it chair (2008-2015).