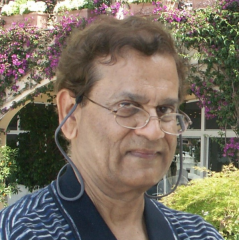 Asim Roy, Ph.D. is a Professor of Information Systems at Arizona State University. He received his B.E. in Mechanical Engineering from Calcutta University, India, his M.S. in Operations Research from Case Western Reserve University, Cleveland, Ohio, and his Ph.D. in Operations Research from the University of Texas at Austin. He has been a Visiting Scholar at Stanford University, visiting Professor David Rumelhart in the Psychology Department, and a Visiting Scientist at the Oak Ridge National Laboratory, Tennessee. He was an ASU-Mayo Clinic Alliance Fellow in 2017 and developed personalized models for heart failure prediction.

He is the founder of the faculty startup Teuvonet Technologies (www.teuvonet.com). Teuvonet Technologies develops machine learning systems that are embedded in GPUs, FPGAs and other types of hardware platforms, including Qualcomm's Snapdragon chip that is widely used in Android phones. The machine learning system working on Snapdragon phones essentially means that you can have "machine learning in your pocket.” Such embedded systems can learn in real-time from streaming data at the edge of the Internet of Things (IoT) and don’t need to transfer data to the cloud for learning.

He was on the Governing Board of the International Neural Network Society (INNS) and its VP of Industrial Relations. He is the founder of two INNS Sections, one on Autonomous Machine Learning (AML Section) and the other on Big Data Analytics (Big Data Section). He also started the Virtual Technical Event series of INNS (Virtual Technical Events (inns.org)).

He was the Guest Editor-in-Chief of an open access eBook Representation in the Brain of Frontiers in Psychology. He was also the Guest Editor-in-Chief of two special issues of Neural Networks – one on autonomous learning and the other on big data analytics. He is the Senior Editor of the Big Data Analytics section of Cognitive Computation | Home (springer.com) and serves on the editorial boards of Neural Networks and Cognitive Computation | Home (springer.com).

He has served on the organizing committees of many scientific conferences. He started the Big Data conference series of INNS and was the General Co-Chair of the first one in San Francisco in 2015. He was the Technical Program Co-Chair of IJCNN 2015 (International Joint Conference on Neural Networks) in Ireland and the IJCNN Technical Program Co-Chair for the World Congress on Computational Intelligence 2018 (WCCI 2018) in Rio de Janeiro, Brazil. He was the IJCNN Conference Chair for WCCI 2020 in Glasgow, UK (WCCI 2020). He was the Program Chair for the ORSA/TIMS (Operations Research Society of America / The Institute of Management Sciences) National meeting in Las Vegas and General Chair of the ORSA/TIMS National meeting in Phoenix. He has been listed in Who’s Who in America.

Designed and developed IFPS/OPTIMUM
Asim designed and developed the software system IFPS/OPTIMUM that pioneered the idea of incorporating optimization tools in financial and planning languages for managerial use. It has been used by hundreds of corporations worldwide for financial, corporate, and production planning. The system had saved many companies hundreds of millions of dollars. Following in its footsteps, such optimization systems are now widely available with spreadsheet systems such as Excel Solver within Excel.