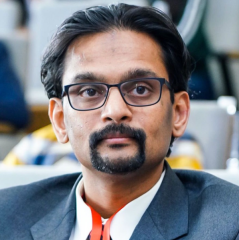 Kaushal Rege is a professor of chemical engineering and a member of the graduate faculty in the biological design program at Arizona State University. He completed his doctorate in chemical engineering at Rensselaer Polytechnic Institute and went on to postdoctoral research with Massachusetts General Hospital and Harvard Medical School in Boston, MA.

Rege has made notable progress with photothermal nanomaterials, using them with polymers and polypeptides to repair body tissues. His research findings have major implications for repair and regeneration of ruptured intestines, colorectal tissue and the repair of skin and eye injuries. He has used nanomaterials – gold nanorods – with optical properties that convert light into heat, which can be used to seal together body tissues to help repair the impacts of surgery. He has also used the photothermal properties of gold nanorods to trigger a process that is being shown to kill cancer cells.

His work has attracted funding from the National Science Foundation, the National Institutes of Health and the Mayo Clinic Center for Regenerative Medicine. In recent years, his research findings have been featured in several leading science and engineering news publications, including Scientific American. Her received the New Investigator Award from the American Society of Photobiology in 2014 and the 2010 Young Investigator Award from the Defense Threat Reduction Agency (DoD) for developing smart materials for sensor technology used in military intelligence and defense systems.