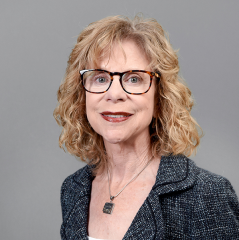 Sally L. Kitch is University and Regents Professor of women's and gender studies, founding director of the Institute for Humanities Research and of the Humanities Lab at ASU. She is also a Distinguished Sustainability Scientist at the Wrigley Institute for Sustainability at Arizona State University and affiliated faculty member with the Piper Center for Creative Writing and the School of Future Innovation in Society.

Kitch came to ASU in 2006 from The Ohio State University, where she was a Distinguished Humanities Professor of Women's Studies and chair of the Department of Women's Studies. Professor Kitch specializes in three major research and teaching areas: 1) feminist theory, including the intellectual history of gender and racial ideology in the U.S. and other countries and the impact of gender representation in visual and narrative culture on the lived realities of diverse women's lives; 2) feminist epistemology, the epistemology of the humanities, and theories of interdisciplinary knowledge production; 3) environmental humanities, including the importance of the humanities to sustainability science and the relationship of sustainability to gender and racial ideologies.

1) She has written three books on feminism and utopianism and developed that as a sub-field of feminist theory. Her most recent work involves the resistance of Afghan women leaders to their country's gender ideology. Her book on that topic, "Contested Terrain: Reflections with Afghan Women Leaders," was published in 2014. Her study of the history of race-gender intersectionality, "The Specter of Sex: Gendered Foundations of Racial Formation in the U.S." (2009) won top-two recognition by the John Hope Franklin Prize of the American Studies Association. She has written three books about gender and utopias/utopianism: "Higher Ground: From Utopianism to Realism in American Feminist Thought and Theory" (University of Chicago Press, 2000); "Chaste Liberation: Celibacy and Female Cultural Status" (University of Illinois Press, 1989) and "This Strange Society of Women: Reading the Letters and Lives of the Woman's Commonwealth" (Ohio State University Press, 1993). The latter have also won national prizes.

Recent work in areas 2) and 3) includes a collaborative research project, "From Innovation to Progress: Addressing Hazards of the Sustainability Sciences, and an article, "How Can Humanities Interventions Promote Progress in the Environmental Sciences?" Her work on the Humanities Lab includes expertise in the epistemology of the humanities and its impact on grand social challenges of our time.

As the founder and chair of two women's studies departments during her career, Professor Kitch has designed both undergraduate and graduate curricula and offered a wide range of courses in the intellectual history of Western feminism, contemporary feminist theory, and gender representation in visual and narrative culture. She has also taught in the areas of intersectionality and transnational feminism. In recent years, Professor Kitch has taught primarily graduate courses at Ohio State University and at ASU. In spring 2012, she team-taught a graduate course on Gender, Religion, and Human Rights. Her most recent teaching includes a team-taught course called "Sustaining Humans--A Humanities Lab," in spring 2017.

Professor Kitch served as president of the Faculty Women's Association at ASU in 2009-10, where she initiated a survey of faculty women's professional needs. She is on the Faculty Advisory Board of the Origins Initiative at ASU and works with the Frankenstein Project and the Creation Project. She initiated the development of the Nexus Digital and Computational Humanities Lab, which formally launched in 2013. She frequently reads manuscripts for scholarly journals and presses and serves as an external reviewer for tenure and promotion cases and women and gender studies departments and programs around the country and abroad. She has been active in the National Women's Studies Association, the Western Humanities Alliance, and the Consortium of Humanities Centers and Institutes (CHCI), through which her work environmental humanities resulted in two Mellon Foundation grants between 2012 and 2015. She now plays a leadership role in the Humanities for the Environment International Coalition resulting from that grant.

Professor Kitch's research focuses on gender and feminism through the analysis of a wide range of social and cultural narratives, including historical documents, political texts, and philosophical and religious treatises.  Through that work, she has developed theories of gender ideology in different time periods and settings.  She has also analyzed how those ideologies have been both enacted and resisted, often by feminist thought and activism.  She has published approximately 30 refereed journal articles and book chapters, and three of her six books have won national prizes.

Kitch has written three books on feminism and utopianism and developed that as a sub-field of feminist theory: Higher Ground: From Utopianism to Realism in American Feminist Thought and Theory (University of Chicago Press, 2000); Chaste Liberation: Celibacy and Female Cultural Status (University of Illinois Press, 1989; winner, National Women’s Studies Association Book Award, 1987) and This Strange Society of Women: Reading the Letters and Lives of the Woman's Commonwealth (Ohio State University Press, 1993, winner, Helen Hooven Santmeyer Prize in Women’s Studies).  Her recent chapter on “Utopia” in Critical Terms for the Study of Gender (University of Chicago Press, 2014) demonstrates her role in creating utopianism as a sub-field in gender studies.

Professor Kitch’s book on the historical grounding of the intersection of race and gender, The Specter of Sex: Gendered Foundations of Racial Formation in the United States (SUNY Press, 2009) analyzes legal, scientific, historical, political, and religious narratives, from the seventeenth to the mid-twentieth century.  Through that analysis, Kitch demonstrates how racial ideology was constructed in the U.S. in gendered terms.  The gendered foundations of racial formation helped to provide an allegedly "natural" basis for biased racial characteristics and hierarchies.  Specter was a top-two finalist for the John Hope Franklin Prize of the American Studies Association.

Professor Kitch is also a scholar of interdisciplinarity as a definining characteristic of the field of women's and gender studies.  She has published several articles about interdisciplinarity research in the field (including “Feminist Interdisciplinary Approaches to Knowledge Building,” in The Handbook of Feminist Research: Theory and Praxis, 2007).  She also co-edited an exemplar of such interdisciplinary study in Women and Careers: Issues and Challenges (1993).

In her role as Director of the Institute for Humanities Research at ASU (2006-2016) and as founder of the Humanities Lab at ASU, Kitch has promoted numerous interdisciplinary research and research-based pedagogical projects across the humanities, social sciences, and sciences.  The faculty working group she founded in 2007 on Humanities and Sustainability, along with her leadership of the Humanities for the Environment initiative in the Consortium for Humanities Centers and Institutes (CHCI) resulted in two Mellon Foundation Grants to support an international project, Humanities for the Environment, 2012-15.  Kitch remains a PI for the North American Observatory of that project, which has continued and grown.  Because of that sustainability work, Kitch was named a Distinguished Sustainability Scientist in the Wrigley Institute for Global Sustainability in 2014.