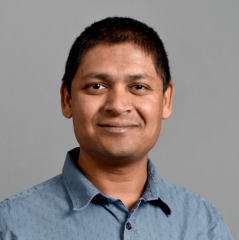 Aviral Shrivastava is an associate professor in the School of Computing and Augmented Intelligence at the Arizona State University, where he has established and heads the Compiler and Microarchitecture Labs (CML).

He received his master's degree and doctorate in information and computer science from University of California, Irvine, and bachelor's degree in computer science and engineering from Indian Institute of Technology, Delhi. He is a 2011 National Science Foundation (NSF) CAREER Award recipient, and recipient of 2012 Outstanding Junior Researcher in CSE at ASU. He was also a visiting faculty member in the EECS Department at University of California, Berkeley for 2012-2014.

His research lies at the intersection of compilers and architectures of embedded and multi-core systems, with the goal of improving power, performance, temperature, energy, reliability and robustness. His research is funded by NSF and several industries including Microsoft, Raytheon Missile Systems, Intel Nvidia, and others. He serves on organizing and program committees of several premier embedded system conferences, including ISLPED, CODES ISSS, CASES and LCTES, and regularly serves on NSF and Department of Energy (DOE) review panels.