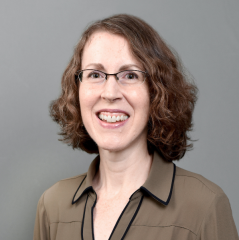 Catherine Saucier, associate professor of musicology at Arizona State University and affiliate faculty of the Arizona Center for Medieval and Renaissance Studies, holds a doctorate and master's in music history from the University of Chicago and a bachelor's in cello performance from Indiana University. Professor Saucier specializes in late-medieval sacred music, hagiography, and city culture in the Low Countries, specifically the Belgian city of Liège, where she has conducted extensive archival and liturgical research supported by grants and fellowships from the Quebec government, the Medieval Academy of America, the University of Chicago, the Arizona Center for Medieval and Renaissance Studies, and ASU. Her current research focuses on the musical veneration of St John the Evangelist in the diocese of Liège and beyond. Publications include her monograph, A Paradise of Priests: Singing the Civic and Episcopal Hagiography of Medieval Liège (University of Rochester Press, 2014), and articles in Early Music History, The Senses and Society, Speculum, Acta Musicologica, the Journal of the Alamire Foundation, and the Journal of Musicology.

Professor Saucier is co-founder and faculty sponsor of the ASU Early Music Chamber Choir and former president of the Phoenix Early Music Society.