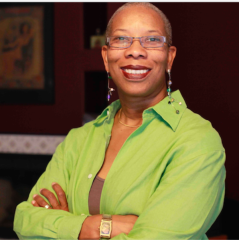 C.A. Griffith is an award-winning filmmaker with more than three decades of film production experience. Trained in New York’s independent film community, Griffith’s credits include the feature film Juice starring Tupac Shakur, PBS and BBC documentaries such as A Litany For Survival: The Life and Work of Audre Lorde (cinematographer), D.A. Pennebaker’s Branford Marsalis: The Music Tells You (camera operator) and Depeche Mode 101 (1st AC), Eyes on the Prize I & II,  St. Clair Bourne’s Making ‘Do the Right Thing’ and music videos from Tracy Chapman and Public Enemy to The Rolling Stones. As director, Griffith’s credits include the award-winning documentary Mountains That Take Wing—Angela Davis & Yuri Kochiyama and her dramatic feature debut, Del Otro Lado (The Other Side), a Spanish language, gay male film that was shot on location in Mexico City. Her screenplays have made the finals of the Sundance Screenwriters and Directors Labs and won a top award from the Latino Screenplay Competition.

In November 2019, Griffith and Quan were honored to have Mountains That Take Wing screen as one of eight films selected for Picture Lock: 30 Years of Film/Video Residencies at the Wexner Center for the Arts. See: https://wexarts.org/explore/picture-lock-30-years-film-video-residencies

Please visit Professor Griffith's production website and newly-launched YouTube channel for more information about her and her media related work: http://www.quadproductions.org and https://www.youtube.com/channel/UCMHwnf6BiqvBPBROfI-yILA

Her award-winning film, Mountains That Take Wing, covers over 100 years of social movement history and the ways ordinary people have done extraordinary things in the face of extreme hatred and injustice. For nearly a decade, it headlined the Women Make Movies special collection, EXTRAORDINARY AMERICAN WOMEN, ORDINARY LIVES and continues to be featured at film screenings and events around the globe.

América's Home (2014, 63 minutes). Before Hurricane Maria lacerated Puerto Rico, América “Meca” Sorrentini-Blaut, a septuagenarian on fixed income, struggled to transform her family’s home into Casa Sofia, a cultural center named after her mother. When developers offered Meca $2-million dollars to knock down Casa Sofia, she turned them down. Meca, her contemporaries and young people in a dozen communities across rapidly gentrifying San Juan fought, and sometimes won, to save their homes and neighborhoods from being bulldozed and disappeared by condo and hotel developers. América’s Home is an enchanting panorama of the transformative power of the cultural arts, community and belonging. It is a testament to the resilience of the Puerto Rican people on the island and in Chicago.

Bad Form: Queer, Broke & Amazing! (2021, 90 minutes) refreshingly challenges the myth of gay affluence and reveals an extraordinary world of resilient, economically struggling LGBT people and allies in the Deep South, Southwest, Navajo Nation and queer, coastal Meccas of the U.S. who are surviving, thriving, and trying to get everyone free. Featuring nearly 100 interviews, including Angela Y. Davis, Barbara Smith, Clair Farley, Arthur Áviles, Monica Jones, Kenyon Farrow and Mary Hooks, this stunning cacophony illuminates a universal truth about poverty: Poor LGBT might be broke, but they are far from broken. In fact, they are amazing! And, their insights might just lead all of us in the direction of freedom.