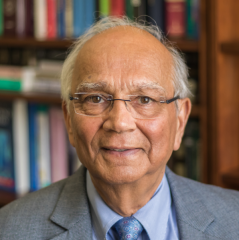 Subhash Mahajan is a Regents and Emeritus Professor and former director of the School of Materials Engineering at Arizona State University. He obtained his undergraduate education in India and then attended the University of California at Berkeley for his graduate studies. After completing his doctorate, he held positions at the University of Denver, The Atomic Energy Research Establishment, Harwell, England, AT&T Bell Laboratories at Murray Hill, New Jersey, and Carnegie Mellon University. He joined Arizona State University in 1997. He was also visiting professor at the University of Antwerp and the Ecole Centrale de Lyon. Professor Mahajan's research focuses on understanding the origins of defects in semiconductors and their influence on device behavior and deformation behavior of solids. He has published extensively on these topics. He is a member of the National Academy of Engineering. Photo: courtesy of creative commons-UCDavis.