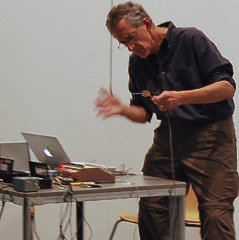 Professor Lerman earned his B.F.A. with Honors in Music and an M.F.A. in film and theater arts, both at Brandeis University in Waltham, Mass. in 1966 and 1970, respectively. Before coming to ASU’s West campus in 1994, he held academic positions at the Boston Museum of Fine Arts School, M.I.T., and Tufts University where he taught experimental filmmaking, electronic music and performance art.

Professor Lerman says his creative activities have always engaged sound art and he has created work in this genre since the late 1960s through music composition, film/video, installation and performance art. Throughout his career he has been seeking and gathering sounds, to create work that may weave through nature in notable landscapes or at sites that pertain to human rights issues.  His recent work has engaged climate change with several trips to record audio/video north of the Arctic Circle in Finland, Norway, Russia and Sweden.

He has worked with piezo disks and other transducers since the 1970’s, building his own microphones and associated electronics. He is well-known for using these materials in his work and sharing aspects of this work on his websites. Sound Generation named him "the internet father of the piezo disk" in 2013.

In 2004, he developed a course called Art and War. Since then he has researched how artists the world over have developed art that deals with war. Other courses include Media and Diversity focusing on global cinema, Utopia/Dystopia exploring science fiction through novels by five female authors, and Documentaries, surveying work in film, video, radio, installation and writing.

His Hoover: Water | Power was installed at the ASU Art Museum for their exhibition on Sustainability from Oct 2009 – Feb 2010.  Recent 3-channel video installations (2015 and 2016) include Arctic Transitions:  in the age of Carbon, made at the Kilpisjarvi Biological Research Station in the NW of Finalnd, and the Danube, Vineyards and Carbon Fiber Rods made at a 3-month residency in Krems, Austria.

His piece Travelon Gamelon, (1978) for amplified bicycles has been performed worldwide many times, most recently at the FKL Symposium in Cagliari, Sardiniam Sept 2017.  Both the Promenade and Concert Versions have been releasead on LP and CD by Folkways/Smithsonian and EM Records, Osaka, Japan  In early 2019, hisad-free video streaming site, SonicJourneys, A Sound Art Station was released on both Apple and roku TV,  in tandem with telvue.com.

For 40+ years, I have worked with piezo electric materials and devices to make self-built transducers/microphones/speakers to record and present my work.  You may find articles, diagrams and schematics for this work at my websites below.  Recently,  I have been using carbon fiber rods to record environmental sound.  In tandem with piezo disks, I have been able to record the sounds of ice melting and forming in work donw north of the Arctic Circle.