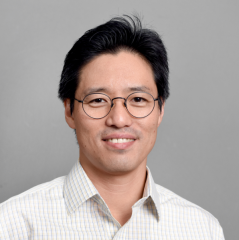 Junseok Chae received a bachelor's degree in metallurgical engineering from Korea University, Seoul, Korea, in 1998, and master's and doctoral degrees in electrical engineering and computer science from University of Michigan, Ann Arbor, in 2000 and 2003, respectively. He joined Arizona State University in 2005 as an assistant professor and now he is associate dean for research at Fulton Schools of Engineering of ASU, and a professor in the School of Electrical, Computer and Energy Engineering. He has published more than 150 journal and conference articles, nine book chapters, one book, and holds four U.S. patents. His areas of interests are wearable sensors and actuators, miniaturized biomedical wireless sensors and systems.

He received the 1st place prize and the best paper award in DAC (Design Automation Conference) student design contest in 2001. He is a recipient of a National Science Foundation (NSF) CAREER award on MEMS (Micro-Electro-Mechanical-Systems) protein sensor array.