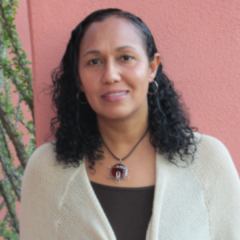 Maria Cruz-Torres is a socio-cultural anthropologist who specializes in environmental, applied and economic anthropology. Her areas of teaching and research are gender and globalization; gender, sustainability and the environment; political ecology; women and work in the informal economic sector; impact of globalization upon local communities and households; and the environmental and social aspects of fisheries and aquaculture development. Professor Cruz-Torres geographic areas of interest are Latin America and the Caribbean. Currently she is conducting research on the topic of gender, globalization, and the environment in Mexico, and is also involved in a National Science Foundation interdisciplinary, transnational collaborative research project focusing on the links between human and biophysical processes in coastal marine ecosystems in Baja California, Mexico. She is an affiliated faculty member with the Center for Biodiversity Outcomes.

Professor Cruz-Torres' teaching reflects many of her research interests and she has developed and taught the following undergraduate and graduate courses: (1) Gender, Culture and Development (2) Gender and Globalization in Latin America; (3) Gender, Sustainability and Social Justice,; and (4) Gender, Globalization and Sustainability. These courses examine current issues facing women in Third World Countries, the manner in which gender shapes and is shaped by globalization processes, and promoting and achieving sustainability and social justice.

Professor Cruz-Torres is an ecological anthropologist whose research focuses on the role of the state, transnational economy, and natural resource exploitation, and their interrelated impacts on the physical environment and the formation of regional coastal areas and local level communities and households. For more than a decade, she has carried out intensive longitudinal empirical research in coastal Western Mexico treating different aspects of these interests. Dr. Cruz-Torres has developed a long-term intellectual and methodological program that now incorporates aspects of economic and political anthropology with an emphasis in understanding the globalizing links of colonial expansion on Latin America to the most recent transnational expansion of post-modern capitalism on the physical, social, economic, political, and cultural environments of human populations. Within this broad construct, she concentrates great attention to the evolving colonial, national, and post-revolutionary state policies that support these expansions and their ultimate impact on local-level community formations and the households of which they are comprised.

The resulting dynamics create new settlement and community forms, as well as redefinitions and negotiations of gender and class that affect the distribution and access to economic and natural resources. These various interests are expressed in her published articles and in her book "Lives of Dust and Water: An Anthropology of Change and Resistance in Northwestern Mexico" (University of Arizona Press). Her most current research, funded by the Wenner-Gren Foundation for Anthropological Research, examines the relationship between gender, natural resources and grassroots social movements in Northwestern Mexico.

Fellow, American Association for the Advancement of Science

The American Association of University Women