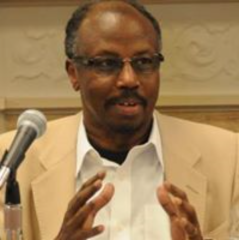 Abdullahi Gallab is a sociologist who brings to his research and teaching the unique perspectives of a scholar and a former journalist practicing in Sudan. His 2008 book "The First Islamist Republic: Development and Disintegration of Islamism in the Sudan" is the story of the social world of Islamism. Based on extensive field work inside and outside the Sudanese Islamist regime that came to power through a military coup in 1989, the book provides an entry point into its local and global worlds as they interact and collide with each other.  This book was reprinted in paperback by Rutledge publisher in 2016.

His second book "A Civil Society Deferred: The Tertiary Grip of Violence in the Sudan" is a critical inquiry into the colonial and post colonial states as they developed in the Sudan and their relationship to violence. This book us published by the University Press of Florida in 2011 and republished by the same publisher in 2011 in paperback.

His forth book: Hasan al-Turabi, the Last of the Islamists: the and his Times 1932–2016 was published by Lexington Books: Roman &Littlefield in2018 and the paperback was republished by the same publisher in paper back in 2019.

His Fifth book is :Citizens and the State in Sudan: Foreigners at home. Is under contract with Routledge UK publisher.

Active in the Sudan Studies Association (SSA) of North American (which now has its home within African and African American Studies in the Arizona State University's School of Social Transformation). He was the president  of (SSA) from 2012-15. Professor Gallab is former editor and current publisher of the organizations bulletin and was conference host of the SSA 2012 conference, held at ASU. This U.S.-based association of scholars promotes the advancement of research in the field of Sudan studies and facilitates the distribution of knowledge and understanding of Greater Sudan and its relationship to the wider world. Gallab also serves as co-chair of Islamic Studies for the American Academy of Religion (AAR) Western Region. He was the President of the organization and he organized its lat conference in 2019 at ASU. He is a  board member for the Journal for the Scientific Study of Religion.

Professor Gallab also serves as a member of the Barrett Honors faculty and on the advisory board for the Center for the Study of Religion and Conflict at ASU.