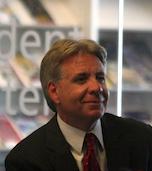 Christopher Callahan is the founding Dean of the Walter Cronkite School of Journalism and Mass Communication at Arizona State University. He came to ASU in August 2005 from the University of Maryland's Philip Merrill College of Journalism, where he served as associate dean. Callahan has brought to campus the Donald W. Reynolds National Center for Business Journalism, created the Knight Center for Digital Media Entrepreneurship, the Cronkite Institute for High School Journalism and the New Media Innovation Lab, expanded the school’s student television newscast, led the design of a new undergraduate curriculum and developed a new intensive professional master’s program. He also launched Cronkite News Service, started a multimedia reporting program with The Arizona Republic’s azcentral.com and created a minority fellowship program with CBS5 and the Meredith Corp.

Callahan is currently leading the national News21 Initiative, a 12-school program aimed at transforming journalism education, and is overseeing the creation of specializations in business journalism and Latino issues coverage. He also led planning for the Cronkite School’s new 225,000-square foot home, which opened in August in downtown Phoenix. Callahan is the author of “A Journalist's Guide to the Internet,” now in its third edition. In 2004 he led a joint study by Maryland and UNITY: Journalists of Color Inc. that explored the lack of racial diversity in the Washington press corps. Before entering journalism education, Callahan was a correspondent for The Associated Press in Washington D.C., and other bureaus in the Northeast. He is a graduate of Harvard University’s John F. Kennedy School of Government and Boston University’s School of Public Communication.