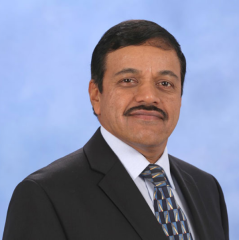 Dr. Ravi Gorur joined UAH in August 2015 as Professor and Department Chair. Prior to this he was at Arizona State University (ASU) from 1987-2015. He has supervised numerous research projects sponsored by the government, utilities and industry in the field of electrical insulation and has co-authored a textbook and over 200 papers in IEEE transactions and conferences. He served as the US Representative to CIGRE Study Committee D1 (advanced materials and systems), chaired various technical committees in the IEEE that was responsible for the development of technical standards and state-of-the-art papers in the field. During May 2013-May 2014, he was on an IPA (Intergovernment Personnel Act) assignment from ASU at the US Department of Energy where he served as the Deputy Assistant Secretary of The Power Systems Engineering R&D division in the Office of Electricity Delivery and Energy Reliability, where he was responsible for research in smart grid, energy storage and cybersecurity for energy delivery systems.. He was elevated to IEEE Fellow in 1998 for contributions in the field of polymeric materials for outdoor insulation. In 2011, he received the Claude de Tourreil lifetime achievement award for contributions to the field of outdoor insulators. He obtained the Bachelor’s and Master’s degrees from India, and the Ph.D. Degree from the University of Windsor, Canada, all in electrical engineering. He was a visiting professor (on sabbatical from ASU) at the National University of Singapore in 1995, and at Queensland University of Technology, Australia, in 2002. At ASU, he created the Gorur Family Award to be awarded to the best undergraduate student in the Electric Power Systems Concentration.