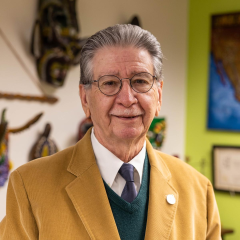 Regents Professor Carlos Velez-Ibanez is in the School of Transborder Studies and School of  Human Evolution and Social Change,  the Presidential Motorola Professor of Neighborhood Revitalization, and the Founding Director Emeritus of the School of Transborder Studies at Arizona State University. His academic fields include applied anthropology, complex social organizations, culture and education, ethno-class relations in complex social systems, migration and adaptation of human populations, political ecology, qualitative methodology and urban anthropology.

Professor Velez-Ibanez concentrates his work on the Transborder regions of the Southwestern U.S. and Mexico. He has numerous publications, including 75 articles and chapters, 12 books in English and Spanish, five monographs of which are based on original field research and three more translated into Spanish, and grants from National Science Foundation, National Endowment for the Humanities, Department of Education,  and numerous private foundations.

His numerous honors most recently include awarded the Franz Boas Award by the American Anthropology Association in 2020 "presented annually by the Association to its members whose careers demonstrate extraordinary achievements that have well served the anthropological profession. Service to the Association is commonly recognized, as are outstanding applications of anthropological knowledge to improving the human condition." He was inducted as a fellow of  the Royal Anthropological Institute of Great Britain and Ireland and nomination to the American Academy of Arts and Sciences in 2017. He was inducted as a Miembro Correspondiente de la Academia Mexicana de Ciencias (2016) - the only American anthropologist so selected, and he was also named the 2016 Rocky Mountain NACCS Scholar. In 2018, he was awarded the Saber es Poder Prize by the Instituto de Mexicanos en el Exterior and the Mexican American Studies Department of the University of Arizona. Previously he was awarded the Brownislaw Malinowski Medal in 1994, elected as a fellow of the American Association for the Advancement of Science in 1994, fellow of the Center for Advanced Studies at Stanford in 1994, and in 1994 the Robert B. Textor and Family Prize for Excellence in Anticipatory Anthropology.

Carlos G. Vélez-Ibáñez' intellectual interests are broadly comparative and publications include 12 books in English and Spanish with three others translated in Spanish as well as more than seventy-five articles and chapters. He has had numerous research and applied projects funded by foundations and governmental agencies including the newest in 2016 which is a five year, 2.2-million-dollar project designed to recruit, train and retain Mexican origin migrant students to Arizona State University.

Carlos G. Vélez-Ibañez.  From Netzahualcóyotl to Aztlán: An Intellectual migration of a transborder pilgrim. Tucson: University of Arizona, In process. 443-ms. pp.

He teaches both undergraduate and graduate courses specializing in the former on language and learning and the latter in the theoretical foundations of transborder knowledge.

He has served pro bono in a number of legal cases, language and structures of meaning of public documents, and the analysis of bias in private and institutional frameworks.

American Association for the Advancement of Science

National Association of Chicanas and Chicanos

Carlos G. Vélez-Ibáñez a Tucson native, received a Ph.D. in Anthropology, UCSD (1975). He was the founding director of Mexican American Studies at San Diego State, and later held professorships in anthropology at UCLA and the University of Arizona where he was the founding director of the Bureau of Applied Research in Anthropology. He became dean in 1994 at the University of California, Riverside of the College of Humanities, Arts and Social Sciences, and presently, he is Regents’ Professor and Founding Director Emeritus of the School of Transborder Studies and Motorola Presidential Professor of Neighborhood Revitalization, and Professor, School of Human Evolution and Social Change at Arizona State University.