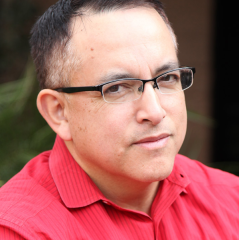 A Chilean-born author, Professor Guillermo Reyes made a name for himself in the Phoenix Theater scene with plays covering sexuality, gender and Latino identity. He first came to ASU as the head of the MFA playwriting program in 1996. He founded Teatro Bravo, a Latino theater company, in 2000 with partners Trino Sandoval and Daniel Enrique Perez.

Immersed in projects that delve into Italian and Italian American culture and its intersections with Latino culture, most recently he's written and directed the plays Hit Music, and Valentino and the Chilean Heiress (a Tango Fantasia).

His plays include: Sirena Queen of the Tango, Chilean Holiday, Men on the Verge of a His-Panic Breakdown (and Men on the Verge 2), Deporting the Divas, Miss Consuel, The Seductions of Johnny Diego, Mother Lolita, Places to Touch Him, Suspects and We Lost it at the Movies to name a few.

In 2010, he published a memoir with the University of Wisconsin Press, entitled "Madre and I:  A Memoir of our Immigrant Lives," chronicling his immigration from Chile and growing up in the D.C. area and in Hollywood, CA.