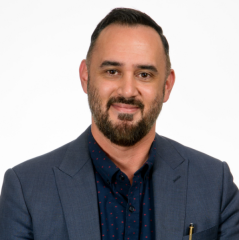 Joshua Brooks began a newly created position with ASU in June of 2018—Program Manager of Distinguished Graduate Fellowships.  His role, generally, is to consult with academic units on increasing the representation of their graduate students, postdocs, and faculty within highly competitive fellowships and awards.  Brooks is also developing and implementing a new streamlined and comprehensive graduate distinguished awards program that will be jointly administered by the Graduate College and Barrett, the Honors College.

Brooks is an ASU alumnus (B.I.S., 2008) and holds a Doctor of Law from Cornell University Law School.  While in law school, he distinguished himself by publishing in one of the world’s highest-ranked law journals and by serving as General Editor of the Cornell Law Review.  After law school, he secured a competitive two-year academic fellowship on an interdisciplinary university-wide research Initiative at Cornell where he served as the e-Government Fellow—teaching law students, researching, publishing, and representing Cornell University’s interests in legislative initiatives in New York City.  As the e-Government Fellow, Brooks became an expert on the intersection of civic technology, policy, public relations, and the manipulation of complex governmental and organizational systems. Brooks has also represented corporate clients as a law associate at Littler Mendelson, P.C., one of the largest law firms in the world.