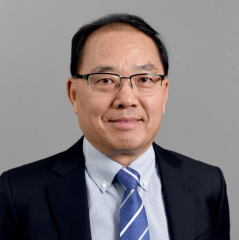 Cun-Zheng Ning has retired from ASU and is now a Professor Emeritus.

Cun-Zheng Ning joined Arizona State University in 2006 as a full professor of electrical engineering from the NASA Center of Nanotechnology at NASA Ames Research Center, and University Affiliated Research Center (UARC) of University of California, where he was a senior scientist, group leader in nanophotonics and task manager in nanotechnology. He was an ISSP Visiting Professor at University of Tokyo in 2006 and a research assistant professor at University of Arizona before joining NASA in 1997. Professor Ning is also adjunct or guest professor of several universties in China. Ning has published more than 200 papers and given more than 220 invited/plenary/colloquium/keynote talks. He was associate editor of IEEE J. Quantum Electronics (2001-2003) and editor of several special issues of IEEE and OSA journals. He was awarded the IEEE Photonics Society Distinguished Lectureship in 2007-2009.

Professor Ning is a fellow of the Optical Society (OSA) and a fellow of IEEE due to his contributions to semiconductor nanophotonics, nanowires and nanolasers. He is also a fellow of The Electromagnetics Academy (FEMA).

see the webpage of his nanophotonics group for more details