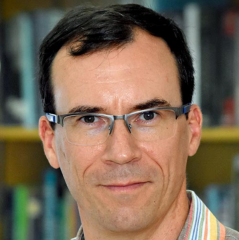 My research and teaching interests range widely, but have in common the desire to understand people, places, objects, and texts on their own terms. I understand humanism as an essentially sympathetic intellectual enterprise that is most comprehending when it employs multiple disciplines, approaches, media, and languages. My research focuses on the relationship between writing, performance, travel, and material culture in the European Middle Ages. I have published on medieval theater manuscripts, heraldry in manuscript illumination, King Charles V's renovation of the Louvre, color in medieval European literature, Alexander the Great and the crusades, and European perceptions of the Mongols, and place in contemporary Haitian literature, among other topics. My first monograph, Illuminating the Roman d'Alexandre (Oxford, Bodleian Library, MS Bodley 264): The Manuscript as Monument, examines a 14th-century illuminated romance manuscript as an embodiment of courtly values, urban spectacle, princely education, and crusade ideology. My current book projects focus on a manuscript of Christine de Pizan’s Epistre Othea (co-authored with Gabriella Parussa); and on the representation of the Mongols in late medieval France. My grants include the Institute for Advanced Study (2013-2014) and the National Humanities Center (2017-2018).

I teach a 300-level survey of French literature, French medieval theater, the history of the French language, a team-taught course on Paris and Florence in the Middle Ages (with Professor Juliann Vitullo), medieval French travel writing, Haitian history and culture, SLC 202: Introduction to Literary and Cultural Theory, and SLC 194: Knights, Magic, Monsters: Medieval and Modern Fantasy. I have twice been nominated for the CLAS Teaching Award (2010, 2013), and was a finalist for ASU Professor of the Year (2013).

Alexander the Great in the Middle Ages

Medieval travel literature and depictions of the East