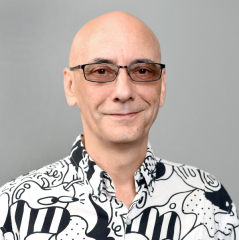 He served as associate principal bass in the Romanian National Radio Orchestra, principal bass in the Sibiu Philharmonic Orchestra, Virtuosi Chamber Orchestra of Bucharest, associate principal and principal bass in Sinfonia Da Camera, and principal bass of the Orchestra Sinfonica Europea. He received the second prize at the 1997 International Society of Bassists Solo Division Competition and the Jury's Special Award for the best performance of the required piece at that competition. He was the winner of the Krannert Center for the Performing Arts Debut Recital Award in 1997, the Central Illinois Chapter of the National Society of Arts and Letters Award in 1996 and in 2013, was honored with the “Recognition award for Solo Performance” by the International Society of Bassists. Mr. Rotaru’s debut solo CD, entitled “Bass*ic Cello Notes” was released by Summit Records in March 2007 and in 2010 released his second CD entitled “Juliana D’Agostini + Catalin Rotaru” which was recorded in Sao Paulo, Brazil. In 2012, Mr. Rotaru recorded his third CD, in collaboration with the National Symphony Orchestra of Paraguay, which includes the world premiere of a double bass performance of the famous violin concerto no. 5 by W.A. Mozart and in 2014 he released a special CD/DVD package with works by Frank Proto which includes the world premiere recording of Proto’s Sonata no. 2 dedicated to him. For the last several years, Rotaru has been a frequent solo performer as recitalist or guest soloist with numerous symphony orchestras and gave master classes at many prestigious institutions and festivals in United States, Asia, Europe and South America. Mr. Rotaru performs on a modern instrument made in Italy by Luciano Golia and a bow made by Marco Pasquino, and is a Pirastro Strings endorsing artist.