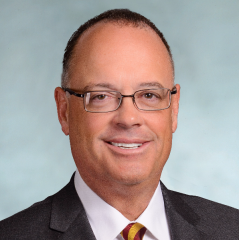 R.F. “Rick” Shangraw Jr. is a Professor of Practice in the School of Public Affairs in the Watts College of Public Service and Community Solutions.  He also is president of Cintana Education.

He previsously served as the chief executive officer of ASU Enterprise Partners. Under Shangraw’s leadership, ASU Enterprise Partners was created in 2016 as a new model for diversified revenue generation to support Arizona State University. Enterprise Partners is an umbrella organization for the foundation and affiliate entities that engage in fundraising, applied research, technology transfer, real estate transactions, and collaborative research initiatives that generate support for the university.

As CEO of Enterprise Partners, Shangraw led an innovative and effective resource raising organization marked by strong governance, speed, flexibility, and drive. As the private enterprise of a public university, it has become a strategic partner advancing higher education, research outcomes and community engagement.  ASU Enterprise Partners was named one of the top companies to work for in Arizona since inception.

During his tenure as CEO of the ASU Foundation, Shangraw directed a team of more than 100 fundraising professionals (and more than 170 people as CEO of Enterprise Partners) that generated over $900 million in new investments and commitments in support of the university. For five consecutive years (2012–16), the foundation was awarded the premier, four-star rating from Charity Navigator, the country’s largest and most respected evaluator of nonprofit organizations. The foundation also received CareerBuilder’s Top Company to Work for in Arizona honors for three consecutive years (2014–16).

Prior to joining the foundation, Shangraw served as ASU’s senior vice president for the Office of Knowledge Enterprise Development (OKED) and director of the Global Institute of Sustainability. As senior vice president for OKED he was responsible for ASU’s research portfolio, which grew to among the top research institutions in the country without a medical school. As director of the Global Institute of Sustainability, Shangraw oversaw research, education, and problem-solving initiatives, with a special focus on urban environments.

Shangraw serves on the board of the ASU McCain Institute for International Leadership.

Before joining ASU he was founder and CEO of Project Performance Corporation, a research and technology consulting firm specializing in environmental, energy, and information management issues. During his tenure, PPC received the Inc. 500 Award for being one of the fastest-growing, privately-held companies in the United States. Prior to PPC, Shangraw was on the faculty of Syracuse University.