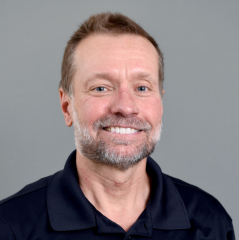 From 1982 to 1985, James Aberle was employed by Hazeltine Corporation, Greenlawn, N.Y., where he worked on the development of wide-band phased array antennas. He was a graduate research assistant at the University of Massachusetts from 1985 to 1989, where he developed and validated computer models for printed antennas. He has been a faculty member of Arizona State University since 1989. He is currently an associate professor in the School of Electrical, Computer and Energy Engineering with research interests in the areas of antennas, signal and power integrity, and RF systems for wireless communication modeling of complex electromagnetic phenomena.

In addition to his position as a faculty member at ASU, Aberle has been a NASA/ASEE summer faculty fellow at NASA Langley Research Center (1993), a visiting academic at the Royal Melbourne Institute of Technology in Melbourne, Victoria, Australia (1997), a visiting researcher at Atlantic Aerospace Electronics Corp. in Greenbelt, MD (1998) and a senior member of the technical staff at a start-up company (2000-2002).