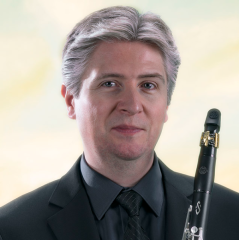 Joshua Gardner is clinical associate professor of music and director of the Performance Physiology Research Laboratory at Arizona State University, where he has taught since 2011. He maintains an active performance career, performing with several ensembles, including the internationally recognized Paradise Winds and Égide Duo, and is a frequent soloist with high school and college bands. He has performed and lectured at conferences for the International Clarinet Association, European Clarinet Association, International Double Reed Society, and North American Saxophone Alliance and has been featured on American Public Radio’s Performance Today. In addition to performing and teaching, Gardner has a strong interest in woodwind pedagogy and research. He won first prize at the International Clarinet Association Research Competition in 2008 and has presented lectures on tongue motion during clarinet performance throughout the US, often accompanied by live tongue imaging. He is currently exploring the use of ultrasound for quantified research and performance diagnostics. As part of the PPR Lab, Gardner often mentors student research initiatives ranging from examining embouchure force dynamics using thin-film force transducers to exploring non-articulatory tongue motion during saxophone performance using ultrasound imaging.

As agents of new repertoire, Égide Duo’s mission is to encourage music that addresses social change, including issues involving the environment/climate, animal and human rights, and equality. They aim to provide clear and pointed musical commentary on issues that affect our society today and tomorrow in an effort to draw attention to and encourage active public engagement on such issues. Joshua and Stefanie Gardner have commissioned works by Eric Mandat, Kurt Mehlenbacher, Jon Russell, John Steinmetz, and others dedicated to affecting social change through music.

Ultrasound imaging of the tongue during performance