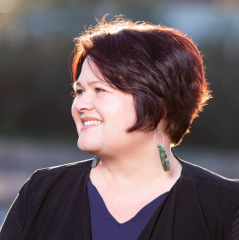 Leah Sarat's work explores the intersection of religion and migration in the U.S.-Mexico borderlands, with attention to ways in which people draw upon religion to confront the challenges of the migration experience and navigate the boundaries of citizenship and belonging. Sarat received her PhD in religion in the Americas from the University of Florida and joined the Religious Studies faculty at Arizona State University in 2010. Her book, "Fire in the Canyon: Religion, Migration, and the Mexican Dream" (New York University Press, 2013) centers on the relationship between U.S. migration and Pentecostalism in an indigenous community in central Mexico that operates an innovative U.S.-Mexico border crossing simulation for tourists.

Sarat's current work focuses on the relationship between immigration, coloniality, and incarceration in Arizona. With support from the Louisville Institute, she has interviewed chaplains, faith-based volunteers, and individuals formerly held at Arizona's Eloy Detention Center to highlight the religious narratives and practices that alternately explain, justify, and resist the realities of private, for-profit immigrant detention in the state. While these stories provide insight on immigrant policing in borderlands, they also offer a window onto the intersection of Christianity with broader debates about safety, fear, liberation, healing, and personhood within the U.S. carceral landscape.

From 2015-2018, Sarat served as ASU's project lead for States of Incarceration, an NEH-funded public humanities collaboration of over twenty universities that has produced a travelling exhibit and web platform on the history and current realities of mass incarceration throughout the United States. In addition to leading graduate students through exhibit curation and development, in fall 2018 Sarat partnered with Phoenix Burton Barr Public Library to develop exhibit programming that brought students, faculty, storytellers, artists, and other community members into dialogue on the intersections between immigration and other forms of imprisonment in Arizona and beyond.

Review of Miraculous Images and Votive Offerings in Mexico by Frank Graziano. Church History: Studies in Christianity and Culture, 86 (1): 272-274 (2017)

“The Resident Alien,” Contribution to The Social World of Deuteronomy by Don C. Benjamin. Eugene, OR: Wipf and Stock, 62-64 (2015)

“Anthropology of the Borderlands.”  In Andrew G. Wood, ed. The Borderlands: An Encyclopedia of Culture and Politics on the U.S.-Mexico Divide.  Westport: Greenwood Press, 10-13 (2008)

"Shielded by the Blood of Christ: Evangelical Migrants in Mexico and the United States." ASU Fellow, Institute for Humanities Research, Arizona State University (2011-2012)

ASU Partnership Lead, States of Incarceration, a collaborative, NEH-funded initiative of the Humanities Action Lab to produce a national traveling exhibit and web platform centering on the history and present reality of mass incarceration (2015-2018)

Project lead, Arizona Detention Research, a collaborative digital platform featuring audio archive, film, and other web-based content highlighting the voices of those who have been held in immigrant detention in Arizona (2018-2019)

To the School of Historical, Philosophical, and Religious Studies

Volunteer Coordinator, The Phoenix Restoration Project, an organization providing support to immigrants in detention in Arizona and those who are newly released  (2013-  )

2018         “What’s the Difference between a Refugee and a Migrant? ASU professor says immigration distinctions are important in understanding the migrant caravan story.” Interview with ASU Now, November 27