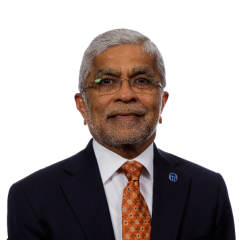 Regents Professor Vijay Vittal is the Ira A. Fulton Chair Professor (2005) and ASU Foundation Professor in Electric Power Systems at Arizona State University. Prior to ASU, Vittal was an Anson Marston Distinguished Professor at the Iowa State University, Electrical and Computer Engineering Department. In addition, Vittal was a Murray and Ruth Harpole Professor and director of the university's Electric Power Research Center and site director of the National Science Foundation IUCRC Power System Engineering Research Center. He also served as the program director for power systems for the National Science Foundation Division of Electrical and Communication Systems in Washington, D.C., from 1993 to 1994. He was the editor-in-chief of the IEEE Transactions on Power Systems from 2005 to 2011.

Professor Vittal was elected to the U.S. National Academy of Engineering in 2004. In 2018, he received the IEEE Power and Energy Society Prabha. S. Kundur Power System Dynamics and Control Award and the Utility Variable-Generation Integration Group Achievement Award. In 2013, he was awarded the IEEE Herman Halperin Transmission and Distribution Technical Field Award. He also received the IEEE Power and Energy Society (PES) Outstanding Power Engineering Educator Award in 2000. He was elected an IEEE Fellow in 1997 and also was awarded the U.S. National Science Foundation Presidential Young Investigator Award in 1985.

2007 – Named among the 150 “Visionaries” — individuals who built Iowa State University on the occasion of ISU’s sesquicentennial.

2004 – Elected Member of the National Academy of Engineering

1997 – Elected Fellow of the Institute of Electrical and Electronics Engineers.

1988 – Faculty Award of Excellence, Presented annually by the NCR Corporation to recognize outstanding contributions to the Academic Education of Electrical Engineering Students.

1985 – Presidential Young Investigator Award, received from the President of the United States in recognition of research and teaching abilities.