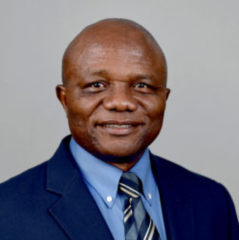 Okey Chris Iheduru joined the Arizona State University faculty in fall of 2004. He received his bachelor's from the University of Nigeria, Nsukka, his master's from the University of Akron, and his doctorate from the University of Connecticut. Professor Iheduru is the author of "The Political Economy of International Shipping in Developing Countries" (1996). He has written numerous book chapters, as well as articles in journals such as International Studies Review,  Review of International Political Economy, Commonwealth and Comparative Politics, African Affairs, Journal of Modern African Studies, Journal of Developing Areas, Ocean Development and International Law, and Maritime Policy and Management. In 2005, he was elected chair of the Executive Committee of the Southern Interdisciplinary Research on Africa (SIRAS). He was a Fulbright-Hays Faculty Research Scholar in South Africa in 2000-2001, and has consulted for the World Bank and the Canadian International Development Agency/SPCS Transport Consortium on the maritime policies of African states. He is also a visiting professor-at-large of national security governance at the Nigerian Defense Academy, Kaduna, Nigeria. His current teaching interests straddle comparative politics and international relations; while his current research interests are focused on social transformation and military leadership, state-mediated capitalism and comparative capitalism; and cross-border non-state actors and changes in African political economy and regional integration.

His current teaching and research interests are focused on state-mediated capitalism in South Africa; government-business relations; globalization, the New African Diaspora and transformations in government-citizen relations; and cross-border non-state actors and changes in African political economy.