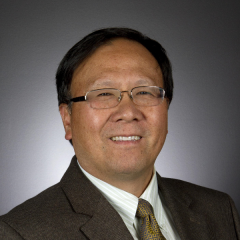 Jerry Y.S. Lin is a Regents Professor in School of Engineering for Matter, Transport and Energy at Arizona State University in Tempe. He is co-Editor-in-Chief of Journal of Membrane Science.  Prior to joining ASU in 2005, Lin was a  Professor of Chemical Engineering and co-director of the National Science Foundation (NSF) Center for Membrane Applied Science and Technology at University of Cincinnati. He served as department chair of chemical engineering at ASU in 2006-2009. Lin heads the Membrane and Energy Laboratory and his areas of expertise include inorganic membrane science, adsorption, separation technologies, catalysis, fuel cell and energy storage, and carbon dioxide capture.

Lin received a bachelor's degree (1982) from Zhejiang University in China, master's degree (1985) and doctorate (1988) from Worcester Polytechnic Institute, MA, all in chemical engineering. He was a postdoctoral staff member at the University of Twente in the Netherlands (1988-1991). Lin joined the faculty of chemical engineering at University of Cincinnati as an assistant professor in 1991 and was promoted to full professor in 1998. As of Aug. 2020, Lin has published 320 refereed journal publications, holds nine patents, and given more than 200 invited lectures in academia, industry and research institutes around world.  Lin has trained over 100 post-doctors and graduate students, including over 40 PhDs.

Professor Lin has received several awards, including the NSF Career Award (1995), Cheung Kong Scholar Award (2001), AIChE Institute Award for Excellence in Industrial Gases Technology (2009). He is a fellow of American Association for the Advancement of Science (since 2009), American Institute of Chemical Engineers (AIChE)(since 2013), and North American Membrane Society (NAMS) (since 2020). Lin's services to the scientific community include serving as a referee for about 50 journals and 20 funding agencies, and co-chairing the 1998 NAMS Annual Meeting, the 1994 MRS Symposium on Materials for Separation Technology, 2001 ACS Symposium on Advanced Membrane Materials. He was the conference chairman of the 2004 International Conference on Inorganic Membranes, and was chair of 2010 Gordon Research Conference on Membrane Materials and Processes, and 2013 North American Membrane Society annual meeting.

Visit the webpage of Dr. Lin's  Membrane and Energy Laboratory