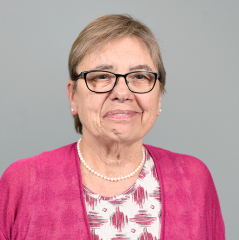 Mary Margaret Fonow, professor of women and gender studies, was named founding director of the School of Social Transformation in 2008. Her research interests include transnational labor activism, women and work in the global economy, and feminist methodology. Professor Fonow has conducted comparative research on workplace change in U.S., Canada and Australia and has recently concluded a study of women's transnational labor activism in male dominated unions in the metal trades. She published, "Union Women:Forging Feminism in the United Steelworkers of America," a book about women steelworkers and their union activism. Her new work focuses on the reformulation of labor rights and women's rights as human rights. This work has resulted in the publication in 2011 of two books, "Making Feminist Politics: Transnational Alliances between Women and Labor" and "Making Globalization Work for Women:Social Rights and Trade Union Leadership." Professor Fonow provides national leadership for the research training of doctoral students in the field of women and gender studies and is a member of the UNESCO Women and Gender Research Network. She has served on the editorial boards of Gender & Society, NWSA Journal, Frontiers: A Journal of Women's Studies, and the Australian Journal of Sociology.