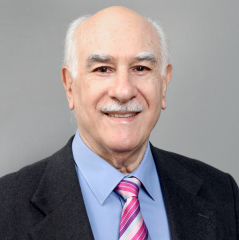 Caio Pagano is an internationally renowned concert pianist, teacher and scholar. He is a distinguished professor of piano at Arizona State University since 1986 having earned the honor of Regents Professor of piano at this institution. He is the recipient of many piano performance awards in Europe and in his native country, Brazil. Pagano has performed throughout four continents in more than 900 public performances as recital soloist, chamber musician and as soloist with orchestras.

He has premiered 36 works in concert halls worldwide, 25 of these were works written and dedicated to him by the composers, including several concertos for piano and orchestra. He has also recorded several of these works. Pagano was the first pianist to perform the complete works of Schoenberg in several capitals of the world.

A frequent performer in East Asia, Caio played in Beijing, Qingdao, Tokyo, Yokohama, Kobe, Kyoto, Osaka and in Singapore at the Esplanade, the Botanical gardens and at the SOTA.

He has adjudicated international competitions in Portugal, Switzerland, Singapore, Brazil, the USA, Panama. He became "Professor of the Year" at Arizona State University in 2010.

In partnership with Maria João Pires, Pagano created the Belgais Centre for Studies of the Arts in Portugal in 2000 and recorded "Sounds of Belgais" for Deutsche Gramophon. He created the Piano Department of the Institute Politechnic in Portugal.

Summit, Soundset, Deutsche Grammophon and Glissando labels publish his acclaimed recordings. His CD "Music for Children" by Heitor Villa-Lobos has received rave reviews which have included “CD of the Month” by BBC Music Magazine, and other magnificent reviews on Gramophone (Great Britain), CD Compact (Spain) and Fanfare (United States).