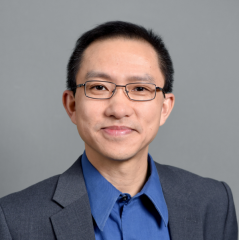 From 2000 to 2004, he was a senior researcher with SHARP Laboratories of America, where he was the technical lead in developing SHARP's HiIMPACT Sports™ technologies. He was also an adjunct professor with the Portland State University from 2003-4.

He won twice SHARP Labs' President Awards, in 2001 and 2004 respectively. He also won SHARP Labs' Inventor of the Year Award in 2002. He is a recipient of the National Science Foundation's CAREER Award (2008-2009). He was named a Fulton Exemplar Faculty in 2017 at ASU. He holds 16 issued U.S. Patents. His work has been featured on NY Times, EE Times, MSNBC, Discovery News, ABC News, Gizmodo India, and many other media sources.

Visual computing and machine learning, especially their application in the context of human-centered computing.