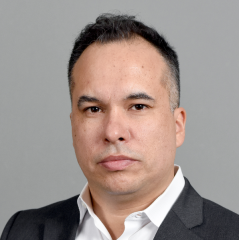 Federico Sanabria is an associate professor in the Department of Psychology at Arizona State University. He received his professional degree in psychology from the Universidad de los Andes (Bogotá, Colombia), and his master's and doctorate in experimental psychology from the State University of New York (SUNY) at Stony Brook, under the mentorship of Dr. Howard Rachlin (animal models of choice and self-control). He joined Arizona State University in 2004 as a postdoctoral research associate, under the mentorship of Dr. Peter R. Killeen (quantitative models of motivated behavior; animal models of attention deficit hyperactivity disorder) and Dr. Janet L. Neisewander (psychopharmacology, with an emphasis on nicotine). In 2008, he joined the faculty in the Behavioral Neuroscience program in the Department of Psychology. He studies basic behavioral and cognitive processes underlying behavioral regulation in various species, and applies this research to the study of psychiatric disorders, primarily substance abuse and attention deficit hyperactivity disorder (ADHD).

Aside from maintaining a productive laboratory (47 empirical, peer-reviewed publications by 2017), and training and mentoring graduate and undergraduate students, Professor Sanabria has taken multiple leadership roles, including president of the International Society for Comparative Psychology (ISCP), member of the Board of Directors of the Society for the Experimental Analysis of Behavior (SEAB), member of the Executive Board of the Society for the Quantitative Analysis of Behavior (SQAB), program board coordinator for the Annual Convention of the Association for Behavior Analysis International (ABAI), and associate editor for Learning & Behavior, and the Journal of the Experimental Analysis of Behavior.

Experimental research on basic behavioral and cognitive processes underlying behavioral regulation in various species, and the application of this research to the study of psychiatric disorders, primarily substance abuse and attention deficit hyperactivity disorder (ADHD). Processes include learning, timing, choice, and response inhibition.

Real-time models of behavior. The main purpose of these models is to analytically isolate changes in motivation, learning, and sensorimotor capacity in free-operant performance, such as during the acquisition, maintenance, and extinction of food and drug self-administration. Together, these models have been used to account for spontaneous exploratory behavior (Cabrera et al., 2013), Pavlovian conditioning (Killeen et al., 2009), instrumental behavior (Brackney et al., 2011; Daniels & Sanabria, 2017a) and its disruption (Brackney et al., 2017), adjunctive behavior (Íbias et al., 2015, 2017), choice (Sanabria & Thrailkill, 2009), and timing (Daniels & Sanabria, 2017b). An introductory video is available here.

Response inhibition capacity (RIC). Impulsivity is a broad construct that encompasses multiple behavioral problems, including a reduced capacity to withhold reinforced responses. This capacity is known as response inhibition capacity (RIC); its deficit is a characteristic of multiple psychiatric disorders, including depression and attention-deficit hyperactivity disorder. Our laboratory has validated a method for assessing RIC in animal models (Watterson et al., 2015). We have applied this method to demonstrate (for the first time!) a methylphenidate (Ritalin)-induced enhancement and a stress-induced reduction of RIC in rats (Hill et al., 2012). We have also shown that nicotine reduces RIC in an animal model of ADHD (Mazur et al., 2014). We are currently adapting this method to study RIC in healthy and genetically modified mice.

Temporal and spatial control of behavior. Our laboratory is concerned with dissociating timing processes from non-timing processes embedded within instrumental behavior (Daniels & Sanabria, 2017b). To accomplish this, our laboratory has examined a novel timing paradigm, has compared performance in this task across species, including humans, and has examined the sensitivity of task performance to nicotine administration. On the spatial dimension, we have demonstrated the contribution of spatial variables (motion and correlation) to Pavlovian sign-tracking (Cabrera et al., 2009; Mazur & Sanabria, 2011). On the olfactory dimension, we have begun exploring how odors are represented in the brains of mice.