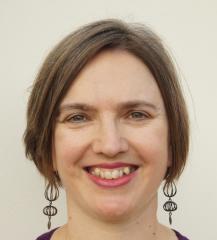 Anna Holian is a cultural and social historian of twentieth-century Europe, with a special interest in the reconstruction of Europe after World War II. Her recent work has focused primarily on migration and displacement in the postwar context. Other research interests include architecture, urban planning, and city life; nationalism and internationalism; and film studies. Her geographical area of specialization is Germany. However, her work ranges broadly across continental Europe and has a strong comparative and transnational dimension.

Holian's first book, Between National Socialism and Soviet Communism: Displaced Persons in Postwar Germany, tackles the big question of how Europeans made sense of the Second World War. It examines how Eastern European refugees in postwar Germany defined and represented themselves. Focusing on Polish, Ukrainian, Russian, and Jewish refugees, it explores how divergent historical narratives about the war, especially wartime encounters with Nazi and Soviet power, formed the basis for the development of distinct displaced political communities.

She is currently working on two new book-length research projects. The first, Setting Up Shop in the House of the Hangman: Jewish Economic Life in Postwar Germany, looks at postwar Jewish history from the perspective of migrant economies and ethnic entrepreneurship. It examines how Jews made a living in postwar Germany and how making a living and making a "home" were intertwined. Covering the period between the end of the war and the mid-1970s, it offers a social and economic history of a long and painful (re-)integration process. It challenges the prevailing view that Jews in postwar Germany were “sojourners,” temporary residents who were prepared to leave—and abandon their businesses—at the earliest opportunity. It also considers how survivors’ economic biographies mapped onto the larger economic history of postwar West Germany. It is often assumed that Jewish economic life followed the general trajectory of the postwar West German economy, from privation in the immediate postwar years to affluence in the 1950s, 60s, and beyond. Setting Up Shop shows that for a number of reasons, including the lasting consequences of Nazi-era expropriation, postwar institutional discrimination, and concentration in declining branches of the economy, most Jewish entrepreneurs benefited only modestly from the economic boom.

Holian's second new project, Europe’s War Children: A Cinematic History, explores how postwar European filmmakers addressed what was perceived as one of the critical issues of the day: war children. Combining historical and film studies methodologies, it examines how the “problem” of war children was represented in popular culture and how popular cultural understandings drew on and fed discussions among politicians, social workers, and medical professionals.

Holian is also involved in a large collaborative research project entitled “Geographies of the Holocaust.” Based at Middlebury College and Texas State University, the project brings together historians, art historians, and geographers to explore how spatial methods of analysis can enhance our knowledge of the Holocaust. Together with the geographer Alberto Giordano, she has examined spatio-temporal patterns of flight and deportation in Italy during the period of German occupation. The results of their research were published in Geographies of the Holocaust, ed. Anne Kelly Knowles, Tim Cole, and Alberto Giordano (Bloomington: Indiana University Press, 2014). More information about the project can be found at the United States Holocaust Memorial Museum website. A visualization for the Italian case study can also be found at the Stanford Spatial History Project website.

Holian's teaching focuses on nineteenth- and twentieth-century Germany, the Holocaust, European fascism, Europe since 1945, migration in modern Europe, and history and film.