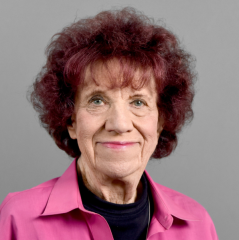 Muriel Magenta née Zimmerman is a visual artist working in new media genres of computer art, installation, multimedia performance as well as video and sculpture. Her installations involve the interface between electronic media and the audience, creating visual/perceptual experiences within actual spaces, transforming them into hybrids between virtual environments and lived space.

Magenta has had solo exhibitions at the University of Southern California, Kansas City Art Institute, LACE: Los Angeles Contemporary Exhibitions, Scottsdale Center for the Arts, among others. Her work has been exhibited internationally in group exhibitions at the Whitney Museum of American Art, Brussels International Film Festival, European Media Festival, Brooklyn Film Festival, SIGGRAPH among others. Magenta served as the national president of the Women's Caucus for Art, and has been involved in the women's art movement for decades in leadership positions. She has also curated exhibitions, such as Push Comes to Shove: Women and Power, in collaboration with the Scottsdale Museum of Contemporary Art and Arizona State University.

Magenta is professor of art at Arizona State University.