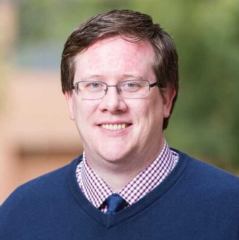 Kory W. Hedman is a Professor in the School of ECEE and he is the Director of the Power Systems Engineering Research Center (PSERC). PSERC was formed in 1996 and is one of the most successful NSF IUCRCs with 13 university members and 25 industry members. Dr. Hedman received the Presidential Early Career Award for Scientists and Engineers (PECASE) from President Barack H. Obama in January 2017, recommended by the US Department of Energy (DOE). The PECASE award is the highest honor bestowed on outstanding scientists and engineers in the early stages of their independent research careers. Dr. Hedman is also the recipient of the IEEE PES Outstanding Young Engineer Award and multiple ASU, IEEE Phoenix Section, and INFORMS awards and honors for his efforts in research, teaching, and service.

From 2017-2020, Dr. Hedman served as a Program Director for the Advanced Research Projects Agency-Energy (ARPA-E) office within the US DOE. Dr. Hedman designed and managed multiple ARPA-E programs and projects totaling over $130M including, but not limited to, the Grid Optimization (GO) Competition and the Performance-based Energy Resource Feedback, Optimization, and Risk Management (PERFORM) program.

Dr. Hedman believes in servant leadership and works to support a diverse, equitable, and inclusive workplace environment free from discrimination and harassment.