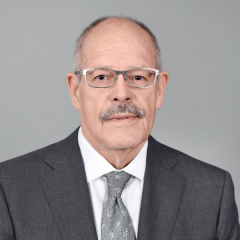 José A. Cárdenas is Senior Vice President and General Counsel of Arizona State University. H was a partner in the law firm of Lewis and Roca before joining ASU in 2009.  He also served as the firm’s managing partner and later as its chairman.

Mr. Cárdenas serves on the boards of Southwest Gas Corporation, the CALA Alliance, (which promotes Latino culture), and the Center for the Future of Arizona.  He also serves on the boards of most of ASU's affiliated entities including Skysong Innovations and Zócalo Public Square.  Mr. Cárdenas was a founding board member of the Translational Genomics Research Institute (TGen), which he chaired from 2002 to 2011. Mr. Cárdenas served as a member of the executive committee of the Arizona Super Bowl Host Committee, (2003-2015), and he is a Trustee of the Virginia G. Piper Charitable Trust. He has also served on many other boards of directors including those of Meridian Bank, Swift Transportation, Chicanos Por La Causa, the Arizona Hispanic Chamber of Commerce, Xico Inc., (an ethnic arts organization),  and Los Abogados Hispanic Bar Association.  Mr. Cárdenas also served as a commissioner on Arizona’s Commerce and Economic Development Commission and he served three Governors as president of the Arizona-Mexico Commission.

Since 2003, Mr. Cárdenas has served as the host of the Eight/KAET weekly public affairs program, Horizonte, which focuses on Arizona issues through an Hispanic lens.  In 2000, he received the Mexican government's Ohtli award given to U.S. residents of Mexican descent in recognition of their service to Mexican communities in the United States.  He was Valley Leadership’s 2000 Man of the Year.

Mr. Cárdenas has an AV (“Preeminent Attorney”) rating from Martindale-Hubbell.

In 2006, Mr. Cárdenas was selected as one of the Lawdragon top 500 litigators in America, one of seven from Arizona.

Mr. Cárdenas is listed in the 2007 and 2008 editions of Southwest Super Lawyers in the category Business Litigation.

Mr. Cárdenas is listed in the 2009 edition of The Best Lawyers in America ®, by Woodward/White, Aiken, S.C. in the category of Commercial Litigation.

In 1995, Mr. Cárdenas was elected to membership in the prestigious American LawInstitute, which develops the Restatements of the Law and uniform laws. Membership is limited to 3000 lawyers, judges and academics.

Mr. Cárdenas is a member of The Fellows of the American Bar Foundation, which is “an honorary organization of lawyers, judges, and legal scholars whose public and private careers have demonstrated outstanding dedication to the welfare of their communities and to the highest principles of the legal profession. . . . Membership in the Fellows is limited to one third of one percent of lawyers licensed to practice in each jurisdiction.”

In 2000, he received the Mexican government's Ohtli award given to U.S. residents of Mexican descent in recognition of their service to Mexican communities in the United States.

He was Valley Leadership’s 2000 Man of the Year.

In 2010, Mr. Cárdenas was inducted into the Maricopa County Bar Association Hall of Fame.

Mr. Cárdenas practiced law for 30 years as a commercial litigator with the Phoenix, Arizona based law firm of Lewis and Roca (now Lewis Roca Rothgerber Christie).