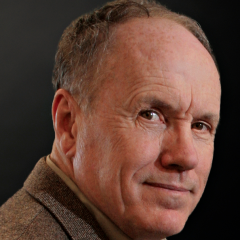 Ed Prescott joined the W. P. Carey School of Business as a regent’s professor in economics in 2003.

Professor Prescott’s research revolutionized macroeconomics by developing new methods for studying business cycle fluctuations. These methods are applicable to all areas of aggregate economics. His other prize-winning work found that the best policy plan is time inconsistency and therefore will not be followed if policymakers have discretions, and that following a policy rule mitigates the time inconsistency problem. His most recent work is titled “On Financing Retirement with an Aging Population” and examines the problem facing many countries including the United States: how to finance retirement consumption as the population ages. His research has been published in Journal of Political Economy, International Economic Review, and the Journal of Monetary Economics, among other leading publications.

Before joining W. P. Carey, Professor Prescott was a visiting research professor in economics at the Australia National University. He received his bachelor’s degree in mathematics from Swarthmore College, his master’s degree in operation research from Case Western Reserve University, and his doctorate in economics from Carnegie Mellon University.

Professor Prescott has been recognized for his industry-leading research, winning the 2004 Nobel Memorial Prize in Economics for pioneering macroeconomic theory. He was awarded the 2015 Adam Smith Award from the National Association of Business Economists, the 2011 Society for the Advancement of Economic Theory Fellow, and the 2002 Erwin Plein Nemmers Prize in Economics from Northwestern University. He also serves as the director of the Center for the Advanced Study in Economic Efficiency at the W. P. Carey School.