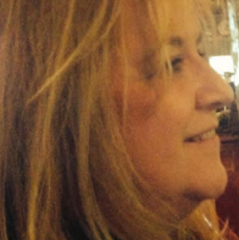 Maureen Daly Goggin's research oeuvre can be divided into four major interrelated strands: history of rhetoric; feminism, visual rhetoric, and material culture; discursively constructed racial, gendered, and sexual identities; and writing studies. These four strands are held together by a common scholarly interest in the ways in which discursive practices are created, circulated, taught, and learned, and the interdynamic roles they play in creating personal and cultural identities.

In one strand of her research, she traces the complex history of what historian Robert Connors called the “transmogrification” of rhetoric in the late 19th century, the concomitant emergence of composition, and the subsequent post-WW II disciplinary formation of rhetoric and composition. Her work in this area has appeared in numerous articles and chapters in edited collections, and is most fully explored in her book "Authoring a Discipline: The Post-World War II Emergence of Rhetoric and Composition," (Lawrence Erlbaum, 2000). This focus also informs the collection she edited, "Inventing a Discipline: Rhetoric Scholarship in Honor of Richard E. Young" (NCTE, 2000). This latter work recognizes not only the enormous contributions Young has made to reviving rhetorical invention but also, in a larger sense, it recognizes the role his mentoring has played in helping to invent the discipline of rhetoric and composition. A compilation of current rhetoric scholarship conducted by his former students, it offers a glimpse into the discipline in the process of inventing itself.

A second major strand of Goggin's research opens new ground, particularly within feminist methologies and visual rhetoric and material culture studies, by shifting attention away from the visual artifact as interpreted text toward the material practices that construct and circulate it. More specifically, in this line of inquiry she examines needlework as a form of meaningful mark-making—a polysemous system of writing. Among the projects that comprise this area, she traces the history of needlework sampler making to demonstrate the ways in which rhetorical practices once formed can be displaced, transformed and then erased as they emerge in new constellations that establish new relationships among rhetors, interlocutors, artifacts, and locations. In this work, she offer a methodology for theorizing and historicizing praxis. Her scholarship in this area has appeared in journals and edited collections. This strand also figures prominently in four edited collections on Women and Material Culture that she co-edited with Beth Fowkes Tobin: "Women and Things, 1750-1950: Gendered Material Strategies" (Ashgate, 2009); "Women and the Material Culture of Needlework and Textiles, 1750-1950" (Ashgate, 2009); "Material Women, 1750-1950: Consuming Desires and Collecting Practices" (Ashgate, 2009); and "Women and the Material Culture of Death" (Ashgate, 2013). She coedited a fifth book in this area with Andrea Feeser and Beth Fowkes Tobin, "The Materiality of Color: The Production, Circulation, and Application of Dyes and Pigments, 1400-1800" (Ashgate, 2012). She coedited another book within this area with Shirley Rose, "Women's Ways of Making" (University of Colorado Press, 2021).

A third strand of Goggin's scholarship explores intersections among race, gender, and sexuality in everyday texts, and appears in journal articles and edited collections. It also informs the collection "Racialized Politics of Desire in Personal Ads" (Rowman and Littlefield, 2008) that she co-edited with Neal A. Lester. The essays in this volume examine how complex intersections among the social categories of race, gender and sexuality within personal ads reveal a dynamic tapestry of power relations and hierarchies. By focusing on how, in each instance, African Americans both construct and are constructed discursively in the brief narrative space of personals, this collection offers a substantively new genre-based exploration of the politics of desire.

Taken together, Goggin's past and ongoing research permits her to draw together a number of her scholarly interests, namely, in the history of rhetoric, rhetorical theories, the relationship between discursive practices and disciplinarity, the role of discourse in constructing sites of knowledge production and distribution, and the discursive construction/performance of race, class, and gender. These various scholarly threads also inform, and are informed by, her teaching of rhetorical traditions, classical rhetoric, theories of invention, history of English studies, cross-disciplinary discourse studies, material culture, and research methods.