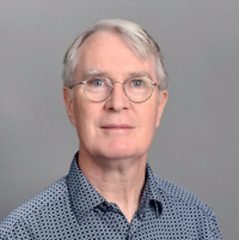 Michael Treacy graduated from Cambridge University in 1976 with a bachelor's in natural sciences, and, in 1979, graduated from the Cavendish Laboratory, Cambridge, with a doctorate in physics. His doctoral topic was in electron microscopy, with emphasis on scanning transmission electron microscopy as a tool for studying heterogeneous catalysts. After postdoctoral positions at IBM Yorktown Heights, and the CNET in Paris, France, he worked at Exxon Research and Engineering Company in Annandale, New Jersey, where he studied heterogeneous catalysts and zeolitic materials. He won both the Barrer and the Breck Awards for his zeolite work conducted at Exxon.

In 1990, he joined the NEC Research Institute in Princeton where he worked on electron microscopy studies of carbon nanotubes, amorphous materials, in-situ studies of switching in ferroelectrics, enumeration of hypothetical zeolite structures, and nanophotonic systems. In 2003, he moved to Arizona State University. His two main research interests are; modeling hypothetical zeolite frameworks; the study of disordered materials by Fluctuation Microscopy, a technique he co-invented with Murray Gibson while at NEC.