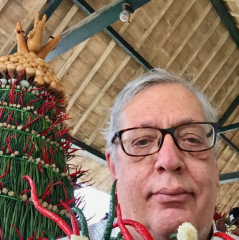 Mark Woodward is research professor at the Center for the Study of Religion and Conflict at Arizona State University. In 2008, he was visiting associate Professor at the S. Rajaratnam School of International Studies, Nanyang Technological University in Singapore nd since then has been a visiting professor at the Center for Religious and Crosscultural Studies at Gadjah Mada University in Yogyakarta, Indonesia. He has  bachelor's, master's and doctoratal degrees in anthropology from the University of Illinois Urbana-Champaign. His research focuses on Islam, religion-state-society relations and religion and conflict in Southeast Asia. He has also conducted research on Islam, politics in West Africa (Niger and Nigeria) and in The United Kingdom and on Buddhism and Hinduism in Southeast Asia. He is author of "Islam in Java. Normative Piety and Mysticism in the Sultanate of Yogyakarta, Defenders of Reason in Islam" (1989) and "Java, Indonesia and Islam" (2010) co-author (with Richard Martin and  Dwi Atmaja) of "Defenders of Reason in Islam. Mutazilism from Medieval School to Modern Symbol" (1997), editor of "Towards a New Paradigm: Intellectual Developments in Indonesian Islam" (1996) and co-editor (with Bianca Smith) of "Gender and Power in Indonesian Islam: Leaders, Feminists, Sufis and Pesantren Selves" (2013). He has published more than 50 scholarly articles in the U.S., Europe, Indonesia and Singapore, many co-authored with Southeast Asian scholars. He is currently directing trans-disciplinary, multi-country projects  on counter-radical Muslim discourse.

Mark Woodward’s research focuses on religion-state-society relationships in Southeast Asia, with an emphasis on Islam in Indonesia. He has also conducted ethnographic research in Burma, Malaysia and Thailand. He has secondary interests in Theravada and Mahayana Buddhism, Christianity and indigenous religions in the region. He has also participated in trans-disciplinary projects concerning radical and counter-radical Muslim discourse and  the correlates of political instability regionally and globally.