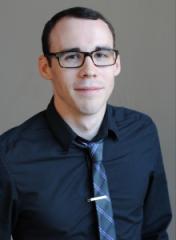 Joey Eschrich is the editor and program manager for the Center for Science and the Imagination at Arizona State University and assistant director for Future Tense, a partnership of ASU, Slate magazine, and New America that explores emerging technologies, culture, policy, and society. He is part of the editorial team behind Future Tense Fiction, a monthly series of short stories about technology, policy, and the future published on Slate’s Future Tense channel. He is based at ASU’s Barbara Barrett and Sandra Day O’Connor Center in Washington, D.C.

He has coedited a number of books of science fiction, nonfiction, and art, including Cities of Light (2021), a collaboration with the U.S. National Renewable Energy Laboratory, The Weight of Light (2019), supported by a grant from the U.S. National Science Foundation, Future Tense Fiction (Unnamed Press, 2019), Visions, Ventures, Escape Velocities (2017), supported by a grant from NASA, and The Rightful Place of Science: Frankenstein (Consortium for Science, Policy and Outcomes, 2017). He was the managing editor for Hieroglyph (William Morrow, 2014) and Frankenstein: Annotated for Scientists, Engineers, and Creators of All Kinds (MIT Press, 2017). He was the fiction editor, with Brenda Cooper and Cynthia Selin, for A Year Without a Winter (Columbia University Press, 2019).

In collaboration with ASU’s Virginia G. Piper Center for Creative Writing, he leads the Everything Change global climate fiction contest, which has run biannually since 2016 and has led to three anthologies of climate fiction.

His writing has appeared in Slate, Zócalo Public Square, and Locus Magazine; in the peer-reviewed journals Men and Masculinities, Bulletin of Science, Technology & Society, Science and Engineering Ethics, Journal of Bioethical Inquiry, and Music, Sound, and the Moving Image; and the book Science Fiction and the Dismal Science (McFarland & Company, 2019). He served as a guest editor for the winter 2021 issue of SFRA Review, the journal of the Science Fiction Research Association.