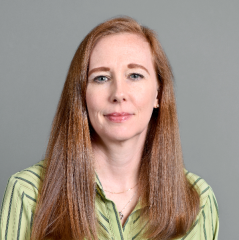 Pamela A. Marshall was born and raised in Denton, TX. Her father is a chemistry professor, and in her youth, she and her brother participated in many types of exothermic reactions. She remembers distinctly learning about the process of DNA replication, transcription and translation in 10th-grade biology. This was a transformative moment in her life as as she decided that genetics and cell biology were extremely elegant and that was what she wanted to study when she grew up. Subsequently, she attended Southern Methodist University in Dallas, TX, majoring in biological sciences, and minoring in chemistry and women's studies. She  was very interested in cellular processes and attended the University of Texas Southwestern Medical School in Dallas, TX, studying the yeast peroxisome in the lab of Joel M. Goodman, earning her doctorate in cell regulation. At UT Southwestern, she won the Ida M. Green Award for outstanding service to the graduate school community. fShe performed postdoctoral research in the Biochemistry Department at UT Southwestern, as well, in the lab of Bruce Horazdovsky researching the yeast vacuole.

Her first faculty appointment was at SUNY College at Fredonia in Fredonia, NY, in 2000. She was drawn to the West campus of ASU in 2003 because of its commitment to the students. She engages undergraduate students in her laboratory research and won the 2008 ASU Faculty Achievement Award for Excellence in Student Mentoring. Since coming to ASU at the West campus, she has mentored more than 100 undergraduate students, many of whom have gone on to medical school.

Dr. Marshall's focuses on the biogenesis and functions of the vacuole of the budding yeast, Saccharomyces cerevisiae. The yeast vacuole is roughly equivalent to the mammalian lysosome in that it has degradative, recycling, and storage functions. There are many human disorders in which lysosomal function is impaired, including Tay-Sachs disease, Krabbe disease, certain forms or cancer, and some types of coronary artery disease. Creating a lysosome and filling it with proteins is a very complex process. Because of this complexity, it is difficult to study lysosome formation in human cells. Therefore, the Marshall lab has chosen the yeast vacuole as a model organism in which to study cellular responses. S. cerevisiae has been shown to be a very effective model system for lysosomal function and biogenesis. The Marshall lab has been focusing on four main areas: vacuolar protein trafficking in general, volutin granule formation, mathematical modeling of calcium homeostasis and gene networks, and microarray analysis of yeast with chronic losses of vacuolar function. All of the research in the Marshall laboratory is performed with undergraduates.

Trained in a Pharmacology Department for her dissertation, she has always had an interest in therapeutics, rational drug design, and toxicology.  She is also part of an interdisciplinary team, with Drs. Carl Wagner and Peter Jurtuka, to synthesize and evaluate novel RXR agonists and antagonists for treatment of cancers and Alzheimer's Disease.

Dr. Marshall is interested in science pedagogy, and the way students learn science.  She has been designing, implementing, and assessing multi-week lab modules in the West Life Sciences curriculum.  She is  also interested in learning modalities and science education as well as compacted versus protracted learning sessions.  She has recently begun researching the mastery learning modality of learning and how it can be implemented in a college course.  Other curricular items of interest include increasing writing in the sciences, implementing online learning exercises, and integrating science disciplines in learning communities.

In addition to her research interests, Dr. Marshall is committed to science and education for all. In 2012, she won volunteer of the year for Copperwood Elementary School (Peoria USD) for her work bringing science to the students.  In 2013, she won the Faculty Women's Association Faculty Mentor of the year for her comitment to mentoring undergradates in her lab, in the TRiO Programs, and in the School in general.  In 2013 she also won the TRiO Supporter of the year for her work the the West campus STEM TRiO SSS program.  For the TRiO STEM Program, she acts as the Faculty Instructor, presenting workshops on a vriety of topics including experimental design, personal statements, and letter of recommendation, as well as teaching the spring Freshman Seminar course for the program.  In June 2013, she was elected a Fellow of the Arizona Nevada Academy of Science for her service to the Academy and her research record.  In 2014 she was awarded the New College Outstanding Service Award for her commitment to science education. In 2015, she received the Outstanding Service Award from the Arizona Nevada Academy of Science for her work with that group and Science Olympiad. Pamela was chosen for the American Society of Microbiology Distinguished Lecture Series for 2015-2017. And recently she won the ASU SUN Award for Excellence for her student-focused commitment to ASU.