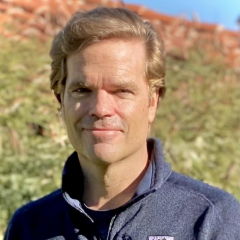 Ben A. Minteer is professor of environmental ethics and conservation and the Arizona Zoological Society Endowed Chair in the School of Life Sciences at ASU. He writes about conservation, the wild, zoos, and the evolution of American environmental thought. Minteer's current work explores the wilderness idea and its expression in landscape photography, from Carleton Watkins and Ansel Adams to the present day.

Professor Minteer's writing has appeared in Science, Nature, PNAS, BioScience, Conservation Biology, Environmental Ethics, Slate, and Earth Island Journal, among other outlets. He has also published many books, including most recently The Fall of the Wild: Extinction, De-Extinction, and the Ethics of Conservation (Columbia University Press) and The Ark and Beyond: The Evolution of Zoo and Aquarium Conservation (University of Chicago Press). His next book (co-authored with Mark Klett and Steve Pyne), Wild Visions: Wilderness as Image and Idea, will be published by Yale University Press in late 2022.

Videos
“The Value of Extinction in the Age of Humans," a public talk on the ethics of de-extinction at the American Museum of Natural History, NYC.
Research Website URL:
http://www.benaminteer.com/
Research Interests: