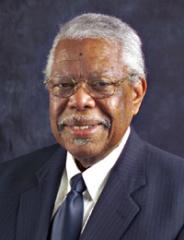 Albert McHenry is an Emeritus Professor with the Ira A. Fulton Schools of Engineering at Arizona State University. He retired from the university in 2008 after a 45-year career in higher education.

Before becoming the founding dean of the the former College of Science and Technology at ASU’s Polytechnic campus, McHenry served on the Tempe campus as professor of technology and chair, for 11 years, of the former Department of Electronics and Computer Technology and director, School of Technology. During his tenure as dean, enrollment in the college increased nearly 55 percent.

The majority of McHenry’s research effort has been focused on the implementation of contextual education as a process with special interest in high-technology preparation and re-education.

McHenry is recognized nationally as an expert and leader in engineering technology education at the undergraduate and graduate levels. He has been honored by the American Society for Engineering Education (ASEE), receiving the 2002 James H. McGraw Award and the 1995 Frederick J. Berger Award for “major contributions to the advancement of engineering technology education.” In 2001, he was elected a fellow grade member of ASEE, and he is serving as vice president for public affairs for the organization.